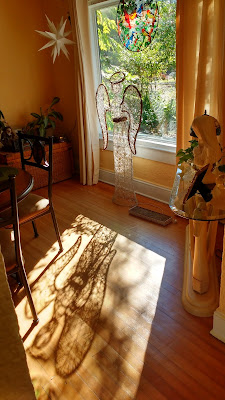 Outside the open window
The morning air is all awash with angels.
--Richard Wilbur


One thing usually leads to another as far as the angels are concerned.  Sunday morning a beautiful Monrovia star popped up on the shelf at Lowes. These stars are an absolute favorite. I had gone for flowers and returned with more light.

That evening when the star shone in the dining room, I was guided to bring Mom's  Light angel from the porch to the large picture window in the dining room for those passing by to see.  Her countenance illumined the dark of the night.  But more was to come.

When sunshine poured through the window the next morning, the angel of light appeared in a beautiful silhouette on the floor.  A reminder that our Angels are with us in times of dreary darkness or bright sunshine, their presence is constant and the message is always Light.

Thanksgiving can be a difficult time for those who have lost loved ones.  Look for angel messages of comfort this week.  They are heart whispers from our loved ones that may appear unexpectedly as feathers, pennies, songs, or whatever speaks to your memory of your dear one.

We give thanks for all the blessings we receive and share to make this season filled with gratitude for all Life, eternal Love.

Rae Karen
Posted by Rae Karen at 10:30 AM Links to this post

Angel of Transformation and Synthesis 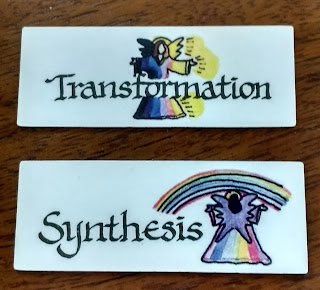 Today two angels stuck together when I reached for a card from the angel bowl.  What a pleasant surprise, both were associated with the rainbow!  Rainbows continue to be a theme and show up in surprising ways.  Yesterday at the lake, the fountain spray reflected the sunlight in a warm array of rainbow colors.

At this time of spiritual transformation, the angels encourage us to keep the faith.  More is going on than we can understand so trust in the Love of God to break through any clouds. Call on the Angels of Transformation and Synthesis today and see what happens.


Rae Karen
Posted by Rae Karen at 11:11 AM Links to this post

Sunday evening while sitting on the porch, it was almost sunset when another rainbow appeared in the sky across the street.  I got a glimpse of it with the cellphone camera.

These wonderful signs in nature encourage our thoughts to come up higher.


We never know how high we are
Till we are called to rise;
And then, if we are true to plan,
Our statures touch the skies.
--Emily Dickinson

We have help with our spiritual acceleration. Thank goodness, the angels are here in full force.  Watch and pray for divine assistance.

Posted by Rae Karen at 10:34 AM Links to this post

Rainbow in the Clouds: An Angel Message 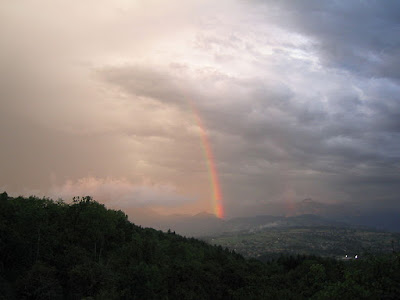 Try to be a rainbow in someone else's cloud.
--  Maya Angelou

The angels speak the language of synchronicity.  The evening of 11/11 on our way to dinner, the angels directed our attention to a circular rainbow!  There it was high up in the clouds!  A wonderful sign of hope.

The morning after the election, I was feeling blue and turned to something green for healing.  Kermit the Frog singing The Rainbow Connection.  You can listen here:https://youtu.be/S2DTLbTQj0I?list=RDS2DTLbTQj0I

After finding this rainbow photo on line this morning, the angels guided me to the perfect companion quote.   Enjoy listening to Maya Angelou's wisdom on rainbows and clouds on youtube.
https://youtu.be/0nYXFletWH4

Posted by Rae Karen at 10:55 AM Links to this post 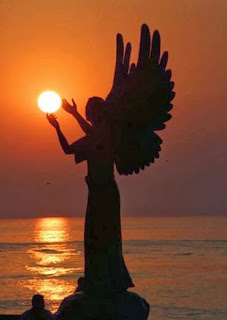 Cosmic energies are blessing the Earth today as the 11:11 portal is open.  Take time to focus on what you want rather than what you don't, as your thoughts will manifest more quickly today.  It is a portal of possibility for the highest good.  Take time to meditate and focus on bringing more Light into the world.  Make a wish and ask the angels for a sign that your heart's desire has been heard.

(artwork from the web)

Posted by Rae Karen at 10:30 AM Links to this post

The Man Who Talks With The Flowers 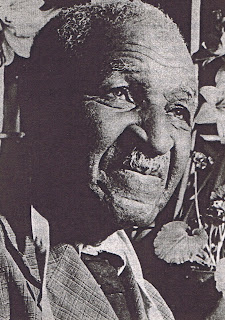 The Angels deliver messages in subtle ways. Sometimes we may find ourselves tuning in to a  TV program just in time to discover a book we are ready to read.

That happened several years ago when a Christian talk show was discussing a fascinating book. I caught the title The Man Who Talks With The Flowers. Who was this man? Imagine my surprise that a brilliant scientist, Dr. George Washington Carver, the famous botanist who discovered the many uses for the peanut, as well as many other outstanding contributions was such a man.

I'll admit I was relieved to learn that a gifted well known scientist could talk with the flowers.

A quote in the book gave me great hope:

"Dr. Carver said, "Last night as I rode to the auditorium I was holding a little white flower in my hand all the way, and in the silence while we rode, I was talking to it and it was talking to me. It told me some wonderful things. And the flowers have never failed to tell me the truth. It told me that there is going to be a great spiritual awakening in the world, and it is going to come from people up here, from people connected with you and me, from plain, simple people who know--not merely believe--but actually know that God answers prayer.

Ihe intimate life story of Dr. George Washington Carver gives insight into his genius as well as his spiritual connection to nature that revealed many secrets to him.

Glenn Clark's wonderful book about his spiritual friend, Dr. George Washington Carver, The Man Who Talks With the Flowers, can be found at  http://www.kessinger.net/ and also on Amazon.

Enjoy your day with the Angels and look for quiet time to reflect on nature and the beauty that surrounds you.

Posted by Rae Karen at 10:58 AM Links to this post