Synchronicity from Beyond: An Angel Message 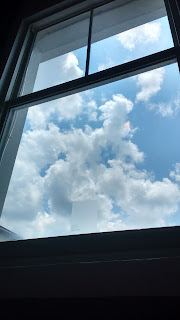 A new friend from South Africa shared a heartfelt story. Many years ago, when he and his wife first came to America, he'd found work at a car transport company, driving vehicles to their destination.   It was a perfect opportunity for the couple to travel and see the U.S.  Many years after he had moved on from that company, his employer had stayed in touch, traveling long distances to attend family weddings and other celebrations. They had a close bond for over twenty years.

My friend had kept the T-shirt with the company's transport logo; although he hardly ever wore it. It was nice but he just was't called to put it on.  One day he pulled it out of the drawer, and decided to wear it all day.  That evening, he heard his old boss and close friend had passed on.  Although it was sad news, he wondered about the coincidence. What had motivated him to wear that special shirt on the day he later heard about his dear friend's transition?

For him, it was comforting, as he realized that more was going on than he realized.

Something similar happened one year on my birthday.  My Bible lesson had included a passage from Psalm 90:  "...we spend our years as a tale that is told."

I wanted to read the whole Psalm and for some reason I pulled out my Grandmother's worn leather Bible. She had passed on many years ago, in her nineties.   Reading Psalm 90, I could feel her loving presence enfold me.    "...we spend our years as a tale that is told."

Later at breakfast, I was surprised to hear Elliot say, "Great day in the morning!"

Grandma would often greet the day that way!

It was a wonderful way to start my birthday.   It's funny because my husband wasn't aware that my Grandmother often said those words, or that I'd just been reading from her Bible which I rarely do.

All minds are joined in love.  More is going on than we realize.