Time to Wake Up: An Angel Message 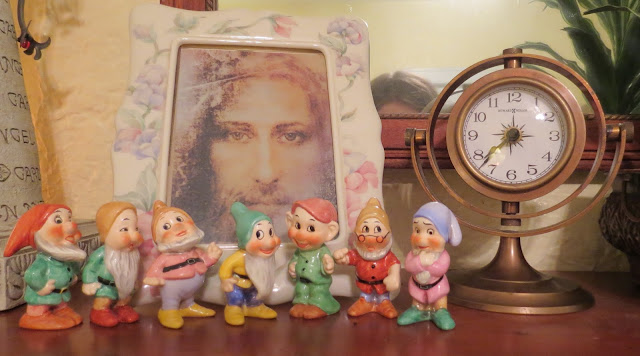 (The Seven Dwarfs and The Prince)

Just recently I learned that the film Snow White was first released in 1937. I was surprised it had been around so long.  A Disney favorite, I loved the little dwarfs, each with their own personality quirk, who try to live harmoniously with Snow White.  Some days it feels as though I have my own dwarfs lodged inside my head:  Guilty, Bossy, Fearful... you get the picture.

Last summer, I found a childhood treasure at a neighborhood yard sale around the corner.  The Seven Dwarfs were sold as a set at a terrific price for Goebel figurines. But there was no Snow White.  The kid in me came home thrilled with my "find" and put them on display in a curio cabinet in my little den.  Just last week, inspiration came to relocate these colorful helpers to a more prominent place where I would notice them more often.  So here they are on the living room mantle by Jesus and the clock. Turns out, they are a reminder to Wake up! "The Prince" has already come, so rejoice!

Seven is the number of perfection and completion.