An Unexpected Blessing: An Angel Message 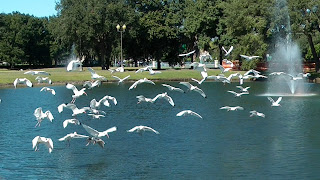 I hope that you are becoming more aware of the daily messages the angels wing your way to help you grow in love and joy.  Late Sunday afternoon, Elliot and I went to the lake for a walk.  The soft breeze and warm sunshine made a nice blend as we sat on a park bench underneath a leafy canopy. I was so thankful to see with such clarity. Sight is such a precious gift.  The lake was the fullest  I've ever seen.  A sign of resilience, having bounced back after the storm.

The path by the lake led to an outdoor gym with various workout machinery.  Along the way, we stopped to pick up a few snack bags and plastic cups that had been thoughtlessly tossed on the grassy area where the birds hang out.

Something happened after we had discarded the trash in a nearby can and sat down on a bright green bench near the water's edge.  About eighty ibis on the other side of the lake suddenly got a signal.  In an instant, the whole flock of  graceful snowy birds were airborne, heading our way!

A joyous blizzard of feathery white wings descended above us, flying so low, a rush of wind brushed our smiling faces.   After that friendly salute, in another wonderful blast of concentrated exhilaration, they circled round about us in unison.  Then we watched as they deliberately made their return to the other side of the lake, from whence they had come.   It all happened so fast, no time for a photo.

I wondered about the message.  Later, I learned that Ibis are wading birds.  They tuck their head under a wing when sleeping, and this is believed to resemble the shape of a heart. They are birds of healing and mystery.  Kind of amusing as Elliot and I both felt the flock had delivered a blessing to us for keeping their habitat clean.