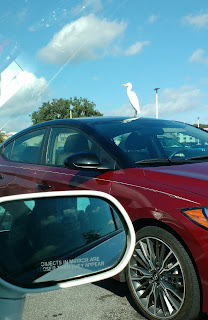 Sometimes we need to be reminded again and again that more is going on than we can realize.  Wonderful things are happening all day, but we are often so self-absorbed we miss the simple  heartfelt blessings that are lovingly placed along our path. Heavenly breadcrumbs, I call them.

Stopping by Publix on Sunday, Elliot ran into the busy grocery store to grab a deli sub for a picnic at Lake Helen.  While I waited in the car, hooked on the internet, I happened to look up. What were the odds?! I chuckled.

Another lone cattle egret was standing on another maroon car! Deja vu!

I shook my head and wondered, what was up with cattle egrets and maroon cars and me?  After all, we were at a different grocery store. And, only a handful of white cow egrets have appeared in town during the eight years we've lived here.

The last angel blog on a cattle egret told how these helpful cowbirds have a symbiotic relationship with the cattle that is called commensalism.  It literally means to eat at the same table.  Cattle egrets are attracted to insects, and by following the cows who graze in the field, the cattle egret feeds off of the bugs that are stirred up in the grasses as the cows move about. In one scoop, the cattle egret eats a hardy meal with little effort, and at the same time helps the cows to have a bug-free repast.

Turns out our little cattle egret helped us by standing watch. Elliot spotted the tall bird on the roof of the maroon car, his white feathers ruffled by the wind.  Elliot quit hunting for our car in the crowded parking lot and headed toward the snowy cow egret.  I had opened my car door to get a picture of the cattle egret.  As soon as Elliot returned with our bagged lunch, the animated cow bird spread its wings, off on another angel assignment.

Enjoy your day with the Angels.  Try to remember to invite them to join you as you go about your day.  Wonderful things happen in the presence of their company.  Ideas wing into your thought, ways to expand your comfort zone, and have a joy-filled, spontaneous day.  You can eat heavenly breadcrumbs at the same table with the Angels.