Out of Gas: An Angel Message 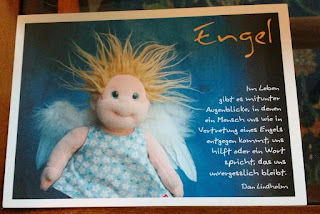 Recently an angel postcard came in the mail from a new postcrossing friend in Germany.  She interpreted the German quote for me.

In life, there are
sometimes moments
when a person
comes to meet us,
as an angel, to
help us or to speak
a word that will remain
unforgettable.
--Dan Lindholm

Sometimes an opportunity comes along, out of the blue, to be an angel for someone.  It's not always convenient, but well worth the effort.  Several years ago, Elliot and I were walking around downtown, enjoying a leisurely afternoon.  A man in his twenties approached us asking for a gas can.  His car had run out of gas in the NO PARKING ZONE on busy New York Avenue and he was afraid he'd get a ticket.

We suggested he try the nearby hardware store.

"I don't have enough money to get a new one."  He said, before walking away.

Something didn't feel quite right as Elliot and I returned to the parking lot, leaving him alone to solve his problem.  But neither of us had felt a strong nudge to go the extra mile. Just as I was about to get into our car, another man walked by wearing a JUST DO IT! T-shirt.

Recognizing an angel assignment, we set out on a mission, and drove by his parked car.  We had plans to return home,  get our gas can, fill it up at the station, and he'd be on the move.  Only he wasn't there by his car. We went on with our plans anyway, but when we stopped by again, he still wasn't anywhere around.

It seemed like a lost cause, but then an angel thought said, just be patient, so we waited.  Minutes passed, and I tried to send him a mental message to return to his car.  His problem had been solved.

Time passed, with no sign of him.  Another angel thought prompted me to affirm: "Divine Mind (God) knows where this young man is."

I listened for guidance.  An idea came to me.  Go to The Christian Science Reading Room across the street.  My  friend was working the desk that afternoon. Maybe she had seen him?

Guidance was correct.  The young man had stopped there for help.  She had given him some money and a container for gas.  He had headed for the nearest gas station several blocks away.  We drove up to the gas station to give him a ride, but he was no where to be seen en route or there.

The word "Patience" kept coming to us.  Don't give up.

So once again, we returned to his empty vehicle to wait.   Before long, he showed up, carrying a can of gas.  With a surprised grin, he gladly added our contribution to the fuel tank, grateful that he now had enough fuel to get home.

The angels guided me to ask him,  "Do you believe in angels?"

It seemed important for him to realize that he is never truly alone.  "Angels  nudged us to help you today." I told him.

He gave us a big smile.

Recently, he'd been released from the hospital. He lifted his shirt to reveal the stitch marks across his back that came from a bad car accident. He almost died and was in a coma for quite while, but now he was so thankful for a new lease on life.

It turned out his name is Michael.   I told him about Archangel Michael, the powerful Archangel whose name means Who is Like God?  The protective warrior Archangel who helps every seeker on the path to fulfill their life purpose by removing obstacles in the way.

He looked surprised, as if no one had ever spoken to him like this.  He smiled and said, he'd been to church for the very first time last week.

I was so thankful to the angels for the message to be patient and not quit in the middle of an angelic assignment.

So today why not be open to ways to be as an angel to help or speak a word that will express Divine Love.

Enjoy your day with the Angels!