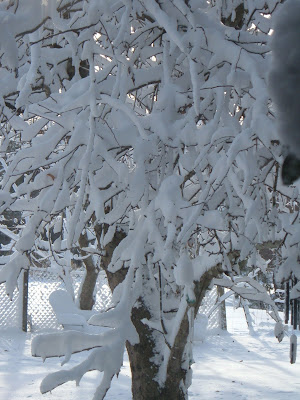 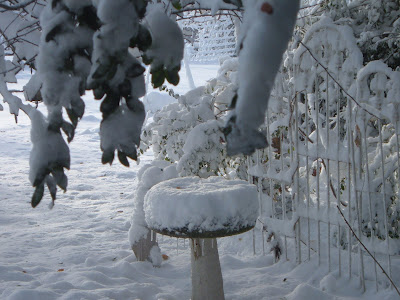 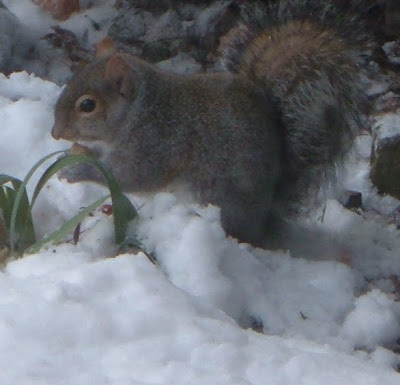 
Our cat, Angel, is on my lap as I write. What a winter wonderland outside the window. The old apple tree dressed in white fluffy snow looks so graceful with bended soft white powdery boughs. The snow on the bird bath is stacked like a white birthday cake in honor of Jesus' birthday. Everything is transformed into purity.

A bushy tailed squirrel had been coming to enjoy his breakfast several mornings last week. It was a breakfast for champions because he deserved a gold medal for his daring feat.

A thin straggly branch high up in a tree right outside the slider had a long sprig of wild berries. He took some strands of berries by stretching as far as he could on the limb. Then bent the spindly branch so he could curl it toward him to eat.

The last strand of black berries hung way down. Far beyond his grasp, he would scamper off. I wanted to help, but Elliot suggested leaving it to nature.

The morning before the snowfall, we watched him as he stretched so far it was a miracle. What determination. Hanging upside down by the very tips of his claws. Straining farther and farther to grasp the last fruit of the season. Fearing for his life, I silently imagined an angel holding him up.

Then somehow he grabbed that single sprig of berries, broke it off and hurried away. Elliot repeated that old adage. "See, you have to go out on the limb to get the fruit." A good reminder for us all.

With the worst snow storm in 21 years to hit the beach, I decided to reward the little fellah with a big Brazilian nut. He savored each nibble, twirling it between his little paws. "This little guy will be speaking Spanish in no time," Elliot joked, as we watched him eat. The squirrel's diet had been bird seed and sunflower seeds.

So nature is the best way to understand life at times. It speaks to us in parables of seasons through the antics of our animal and bird friends.