Keep Having Faith: An Angel Message 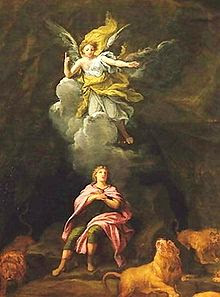 
It takes great faith and courage to believe, especially when things appear to be a lost cause. and we've done our best and yet we find ourselves caught in a precarious position with no seeming way out.  That's what happened to Daniel in the Bible.

He was one of three presidents under King Darius.  God had put his spirit in Daniel, and so the King found favor and set him over the realm.  Then the jealous presidents and princes tried to undermine Daniel, but  could find no fault with him.  It became necessary to create something regarding him and the law of his God.  So they persuaded King Darius to sign a decree that no one should ask a petition of any God or man, except for the King for 30 days or else be cast in the den of lions.

Daniel knew about the law, but being faithful, he went to his house and with his window opened, he kneeled down three times a day to pray and give thanks to his God as was his custom. These men found Daniel praying and had him arrested. The good king was upset that he had passed such a decree because Daniel, his favorite, would now be prosecuted by his own hand.  King Darius had to cast him into the lions' den, but spoke to Daniel, "Thy God whom thou servest continually, he will deliver thee."

After a sleepless night at the palace, the King hurried to the lions' den early the next morning.  A triumphant  Daniel declared, "My  God hath sent his angel, and hath shut the lions' mouths, that they may not hurt me..."

The King had him taken out of the den and he was in no way harmed because he believed in God.

Daniel's experience with an angel in the lion's den brings courage and faith to help us keep our eyes on God and not on the problem, no matter how catastrophic it may appear.  Prayer works miracles so don't lose faith.