A Lesson from the Nature Angels 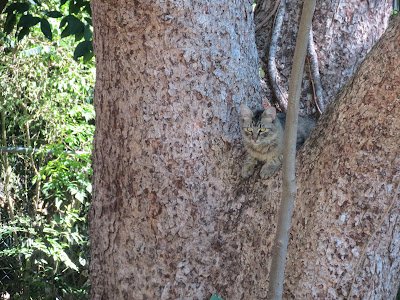 (Mr. Paws resting in the Camphor Tree)
A garden is a quiet spot to watch and learn from nature.  Something unusual happened this morning. I observed a bold blue jay sweep through the air flying low by the back porch. It seemed a strange thing for him to be doing. They usually keep their distance.  Then I watched in amazement as he swooped down and picked up a nugget from the cats' bowl on the stoop.  Mission accomplished, he took off before the cats saw him.  I laughed at the idea of a bird eating cat food.

Although it was kind of amusing.  With the  two stray tabby cats that have adopted us, we no longer fill the bird feeder.  In an effort to protect the birds and squirrels from these feisty tree climbers, the full bag of birdseed is in the laundry room.

So, I watched the daring jay return later for another treat. This time he was even more daring,  landing by the bowl, waiting and looking around.  Both cats woke up and spotted him. He took flight without his goal.  Putting himself at such risk, he had to be real hungry or else the tasty nugget was well worth the danger.  Or maybe it was cat karma? They'd stopped his food supply so he'd help himself to theirs.
The angelic message was perhaps to just relax and let nature take its course.  Put the birdseed in the feeder. Hang it high in the other tree and let it all be whatever it is. Sometimes our best attempts to control circumstances actually hinder rather than help a situation.