The Redeeming Angel, Metatron, and the Rainbow 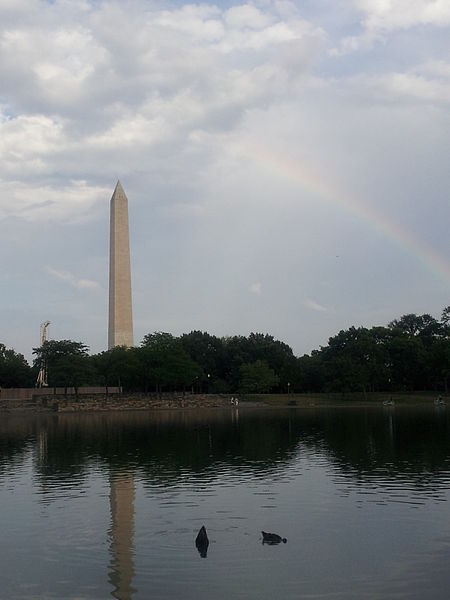 
Synchronicity led me to The Zohar where I came upon an interesting passage about the rainbow in Volume 7.

"...NAMELY there are angel messengers in the world which revolve and turn into several shapes, sometimes female and sometimes male, now Judgment and now Mercy, and all that is the same matter.  In the same manner, this angel has many shapes, and all the colors, WHITE, RED, and GREEN, of the world, THE NUKVA, are in this place.  This is the mystery of:

THE APPEARANCE OF THE BOW, THE NUKVA, contains the three colors.  Since the angel has three colors, he leads the world.  (The redeeming angel, METATRON, receives blessings and then bestows them upon the world.  This angel is male when procuring blessings for the world and is female when there is judgment in the world.)

I was looking for a rainbow to go with the blog, and found this one of the Washington Monument.
The capstone of this 555'  obelisk has the inscription laus deo, "Praise God."  When we put God first all things are possible.