A Red Cardinal and the Mimosa Tree: An Angel Message

Often in the early morning, I sit quietly on the porch, and gratefully soak up the little joys of a new day. Like email, you never know what may show up with a message.

On Saturday morning, a bright red cardinal landed on the limb of the old mimosa tree.   Eight years ago, when we first moved in, I'd mistaken it for a dead stump of spindly bare sticks growing through the chain-link fence. Sweating, I worked hard to dig it up by the roots, but they were anchored deep.  Finally, I yielded, severely cutting it down to a small hard twig.

To my surprise, over the years, that twig grew back stronger, and forcibly began to take the form of a shapely ornamental tree.

So, the rare sight of a red cardinal, perched on the long arm of  the mimosa,  brought to mind a lesson on resurrection.  In the winter, the mimosa tree loses its soft green fern-like leaves. But the story isn't over.  Each spring it returns, gracing our stucco adobe with new life.

Sheepishly, I'm thankful that the forgiving tree held its ground.  Before long, it will blossom again with fragrant pink tufts tickled by the breeze. 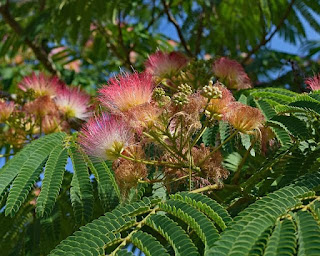 The animated, little red cardinal's loud, joyous singing also captured the attention of  our playful kitten Hei-Hei.  Curious, he jumped up on the windowsill to admire this bright red bird in the tree. Soon he began moving his mouth, chattering a feline song.

Encouraged, the cardinal put on a show. Flying from the tree, he landed on a purple Mexican petunia.  The tall spindly plant bounced wildly trying to support the weight of this welcomed singer.   Two large clay pots, bursting with red geraniums, made a perfect backdrop for his glowing performance.  His bright red wings flitted from the petunias to the Rose of Sharon bush, and again  the little bird enjoyed a playful bounce.

I know when a cardinal shows up, his appearance brings a message to add more color to your life.  It can also serve as a reminder that everything you do is important.  I could see that more clearly as his spontaneous appearance had brightened our morning, just by showing up, and singing his own song.

Easter is a time of resurrection.  Renewal and restoration.  A time to rejoice and sing our own song.
I just learned that the mimosa's flower gets its name from the Greek word 'mimos' which means to mimic.