On Sunday afternoon, Elliot and I took an impromptu ride to the local orchid farm.  It's a sweet place to visit in the countryside.  Not only do they have beautiful exotic flowers and plants inside of a large warehouse, but we love to visit the animals, especially the Jerusalem donkey.  A few years ago,  this gentle brown burrow helped me get over a fear of him. As I shared in another blog, he stuck his face over the fence and looked me straight in the eye.  His irresistible  spirit was so adorable, I had to reach out and give him a pat on the snout. That was the beginning of our bond. 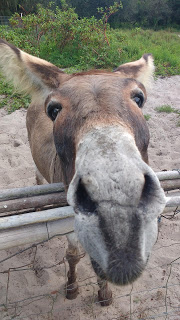 So from time to time, Elliot and I would stop by to enjoy nature and share love with him.

On Sunday, it had been a long time since our last visit to the orchid farm.   As we parked the car, and were  crossing the large grassy field to his private area, we were in for a surprise.  Elliot spotted our four-legged friend laying down by the fence, basking in the sunshine.

We were a good distance away, when the donkey picked up on our signal.  He quickly jumped up on his feet, staring our way.  Alert, ears pinned back, watching.

As we came closer, he began  BRAYING, like never before!  LOUD and LONG! He BRAYED like his heart was breaking. It was so loud, I expected folks to come running out of the nursery, but they didn't.

We called out,"We're coming to see you!"

It's hard to describe what we heard and saw in that DYNAMIC OUTBURST OF LOVE!

I didn't get a photo, but this one I found on-line captures the intensity of his greeting.

As we approached the fence, he was still vocalizing, LOUD, rapidly breathing in and out, HEE! HAW! Mouth wide open, big teeth looming, giving his ALL.  It was really something to behold! And we couldn't help from laughing.

When he calmed down, I rubbed his coarse hairy ears, and caressed his sweet face. Softly I asked him, "Do you know how special you are?"

Big brown eyes looked up at me with such love.

"You're a Jerusalem Donkey!" I told him. "And, today is Mother Mary's Birthday (9/8).  Your devoted donkey ancestor carried Mother Mary, on his back, on a long journey from  Nazareth to Bethlehem so baby Jesus could be born in a stable."

My donkey friend listened intently, flicking his ears while I patted his back, noticing the reason for the name Jerusalem donkey.  Two dark lines naturally form a single cross on his back.  He looked at me as I continued to pet him. I went on to tell him how a donkey had helped Jesus' family flee from King Herod and travel to Egypt shortly after Jesus was born.

He seemed satisfied that donkeys had played such an important role, humbly serving the royal family.

We had a good visit, and when it was time to go, he was content, grazing in the grass by the fence.  I, too, was thankful that the angels had nudged us to the orchid farm to receive such an outpouring of LOVE.