Wake up, Alice! An Angel Message 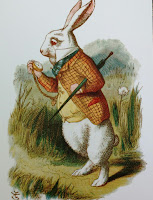 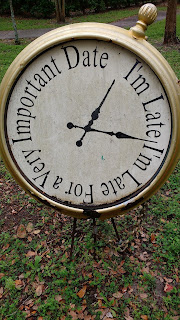 Earlier this week, Elliot and I stopped by Sunflower Park for a photo of the pocket watch from Alice in Wonderland.

Angel thoughts can appear as a recurring theme on your path, in amazing and creative ways that make you stop and wonder, what is going on?  An infinite  life force is always conspiring on our behalf that goes far beyond our five senses.

Nine years ago, Alice in Wonderland  symbolism played a hand when our life was about to move in a new direction.

Out of the blue, characters from Lewis Carroll's adventure popped up in unlikely places, that grabbed our attention.

On a return road trip home early one morning, the drive-thru was backed up at our local McDonald's--a place we passed by often but never went inside.  Not in the mood to go home and make oatmeal, we had decided to grab an egg muffin breakfast on the run. When we sleepily stepped inside the golden arches, what a wake-up surprise.  Alice in Wonderland was featured in a big way.  The motif included the inner workings of a giant  clock, with large hands ticking away on the ceiling.   The late harried rabbit was featured on a pedestal encased in glass.  Time was the center piece, the daily grind. 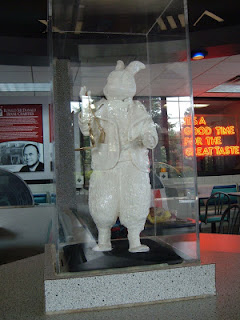 Then in 2011, on a winter trip to Florida, the angels guided us to Sunflower Park in the heart of downtown DeLand.  To our surprise, a giant pocket watch with a plaque was a permanent display in the quaint little park. "I'm late.  I'm late for a very important date."   His admonition always brought me a touch of guilt--like I'd forgotten an important meeting.

That winter while house-hunting to see what may be available, in one place, Alice and Wonderland was  featured on the back splash tiles above a kitchen sink.  Not that the house was a right fit, but something was up.

Back in Virginia, the rabbit hole adventure continued to play out.  At the public library, I ran in to run our books, on the way out, I grabbed a magazine off the free rack.  The cover had this painting of the Pentecost and a featured article, "You Will Receive the Power."

On the ride home, I wondered why I'd grabbed a Catholic magazine, but to my surprise another article, BELIEVE IN THE IMPOSSIBLE, referred to Alice in Wonderland. The synchronicity, the language of angels, brought a smile as I read:

"At one point in the story, Alice says: "There's no use trying, one can't believe impossible things." But the Queen disagrees, saying: "Sometimes I've believed as many as six impossible things before breakfast." The article went on to say that it is the Holy Spirit who helps us to grasp and believe truths that are impossible for us to accept on the basis of logic alone.

I knew this was true whenever  I had stopped and asked the Holy Spirit to judge things for me because I don't truly know the meaning of anything.  Time and again, this yielding would bring peace and the bigger picture would be revealed in such a way as not to put me in greater fear.

With all the Wonderland clues, we watched the Disney movie.  The ending stood out in particular. Young Alice is tired of the magic of Wonderland, and wants to go back home. The angry Queen of Hearts and her army of playing cards are coming after Alice.

Her only hope is to make it to the door up ahead.

Alice frantically grabs the knob and turns it hard, but the door is locked!

"I must go home!"  Alice cries, fearful that she is doomed.

To her surprise, the doorknob speaks,  "But, you are already home."  He tells her. 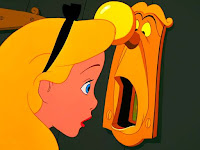 Doubtful, Alice looks through the keyhole.

To her amazement, it's true!  There she is asleep in the shade of the old tree!

Alice knows what she must do!  Shouting through the keyhole, she tries to awaken her sleeping self. "ALICE! WAKE UP!"

The card soldiers are gaining ground.

In the next scene, Alice opens her eyes and finds herself in a safe place that she never left, except in her dream.  The trip down the rabbit hole to Wonderland wasn't real, it was only a dream.

I like that imagery.  Whatever fears may be chasing me down, I must see them as an opportunity to wake up to the truth about me.  The Holy Spirit is the answer to the dream of separation from our loving Creator.  He will help you to awaken and have a happy dream.

"Let me see this differently."