Sometimes we may suddenly find ourselves in a strange, new environment.  Unfamiliar with the local terrain, we struggle to maintain our balance, and keep on running our race, against all odds, as best as we can.

Nature taught this lesson yesterday in a surprising way.  An angel call to feed the ducks got us out of the house and over to the lake before 8:30.  A beautiful sunny day, a man was fishing on the banks in the sparkling waters.  Our favorite sandhill crane family strolled by as I spread a bag of cracked corn around the old cypress tree, although the ducks were absent.

Afterwards, I sat on the bench, soaking up the warm sun's rays.

The fisherman called to Elliot.  He pointed to a small brown turtle in the grass. He had found it in the water, tangled in a mass weeds.  "A box turtle doesn't belong here," he shook his head.  "It's not a water turtle."

Hearing about the rescue, I came to take a look.  He was smaller than others I've seen.  His faded brown shell looked ancient, showered in yellow rays like sunbeams.

"You're the turtle's guardian angel this morning," Elliot smiled.

The motionless boxed turtle gazed up at the kind man, in unspoken gratitude.

"You're welcome, little buddy."  The fisherman said.  "If I knew where your home was, I'd take you there."  He said good-bye, and returned to his truck.

It was a good sign. He was out of his shell, facing the sun.  His domed-back had nicks and scrapes from wear and tear.  His journey had not been an easy one.

The turtle had won the race with the hare.  I wondered, was it our turn to help the little fellow get to a safer place?  Letting it be, I sat on the hillside, leaning against an old tree, wondering what to do.  On a higher level of consciousness, I remember all of God's creations are always in their rightful place.  There is only harmony in God's Love.

A peacefulness enfolded me.

But the little fellow appeared so vulnerable, hunched down in the grass at the water's edge. My motherly instinct was to put him in a box and head for home. He could roam free in the pasture. But since I can be overly "hands-on,"  I listened for angel guidance.

When I checked on him again, there was no progress. He was in the same spot. I offered him an out.

If you want to go home with us, come forward.  He stared at me, but didn't move.  Earlier when I spoke healing words to him, his mouth opened wide.  The most action I'd seen.   It brought a smile of amusement as if he spoke in a silent language of the heart, -- or else it was a big yawn, bored by my chatter.

Letting him rest by the water,  I returned to the tree, unsure what to do. It was a heavenly day.  The cool breeze, sun-lit rippled lake, all kissed by the sun on a heavenly day.  Why worry?

I watched the territorial sandhill crane family stroll down by the shore.  Before long,  they craned their long necks and curiously stared down at the grass. When their red heads, began moving up and down, pecking at something, I sprang into action.

Shooing them away, Elliot jangled the car keys. They stopped pecking, but held their ground, staring at us with orange glowing eyes.  I told them to stop such mean behavior. They could share the lake.  Elliot bent down and grabbed the turtle before there was any real damage.

The box turtle had gone within to protect himself.  Head, arms, legs. Everything tucked inside his hard thick shell, like a rock.    We were out of there!

It turned out, a shallow flower grate box in the trunk made a good transport. Timothy was now heading home, miles away from where he'd been, in record time.

At home, when we popped open the trunk, the box turtle was perky, out of his shell, ready to go. When placed on the grass by the pasture, he hid his face under the shade of a tall leafy weed.    His domed-shell rested in the warm sun.

Have a nice life, we said, happy to be of help, we let him decide which way to go. 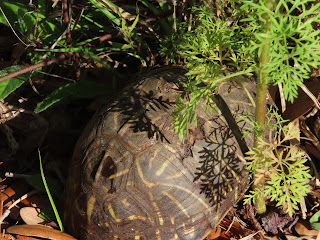 A half-hour later, Timothy, the box turtle, had moved on, to finish his race.

Sandhill cranes represent spiritual guardianship for you, or you will be that for another.  Their aggressiveness stirred us to action. So in the end,  "All things work together for good, except in the ego's judgment."

Turtles represent motherhood, longevity, and awakening to opportunities. A symbol of a turtle was once considered an invitation for blessings of both heaven and earth. When turtle shows up in your life, it usually means to pay attention or you will miss opportunities.*

Sometimes we may need to do more than send prayers and well wishes.   Sometimes we are presented with an opportunity to be an angel and physically help someone run their own race. 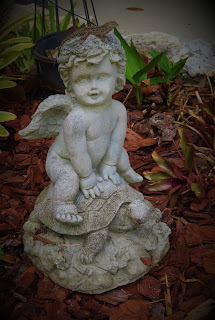