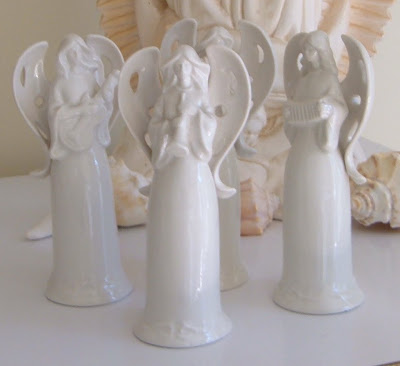 I want to share a beautiful vision I had last month on the morning we left for our trip to New York. I was very worried about a friend battling cancer. I decided to pray instead and get above the dark clouds of despair.

I began to think higher thoughts to lift the veil of consciousness. In my third eye I saw another friend dancing by me carrying a tambourine. She was leading a multitude of angels in the heavenly clouds in her white feathery wings.

Then came another friend in wings.

And several more friends from my spiritual study group passed by in a long line of celestial helpers. They all had wings as they wended their way round and round on white clouds, like tiers on an etheric wedding cake.

The vivid vision was in color and seemed to be a glimpse into the heavenly realms. Soon more and more angels came parading by, taking their position on white clouds spiraling upward, until the cake was filled up with angels.

The last angel stood on top of the cake. I was surprised when he blew a trumpet.

I knew then it was Gabriel. Then Jesus appeared beside him on top of the cake. It was all so unexpected and offered such promise to believe in things yet seen. I had been worrying that my friend had passed over and I saw her, too, as an angel. We were all angels which is what the Edgar Cayce readings say--our Higher Self is our Guardian Angel that never fell from Christ consciousness and still stands at the Throne of God.

I felt so much better. I shared my vision with Elliot and a funny thing happened on our way to New York that day. We stopped for dinner in Seaford, Delaware and then took a walk to a nearby Dollar Tree to stretch our legs after the long drive. There on the shelf in the store I saw a band of white porcelain angels. One especially caught my eye. The one with the trumpet. A reminder of my vision that morning. I bought the band to join us on our trip to see Elliot's father for his 90th birthday.

Whatever challenge you may be facing today, be comforted in knowing that you are more than you seem. You are a child of the Most High. An Angel in God's procession of Love.