In the Wake of the Quake: An Angel Message 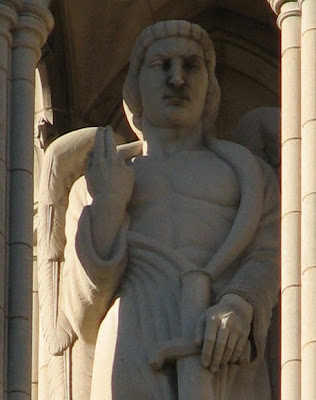 My 93-year-old Mother lives in a retirement community near Alexandria, Virginia. Her apartment is on the 4th floor, the top of her building. When the earthquake hit, she felt as though the walls were about to cave-in and she ran out in the hallway. Never being in an earthquake, it was an experience she wouldn't forget right away.

As frightening as it was, it is a miracle that no one was fatally hurt from the most powerful earthquake to strike the East Coast in 67 years. Other tall buildings suffered damage. The 5.9 magnitude shook the 127 year old Washington Monument. It suffered from cracks at the very top. Last year I'd blogged about the capstone and the Latin words LAUS DEO (Praise God) written on the capstone of the highest building in D.C. A reminder to keep God first.

In researching for this blog, I learned that The Washington Monument is the tallest stone structure in the world and the epicenter of the quake at Mineral, Virginia, both related to the mineral kingdom. After the quake yesterday, I stepped out on my deck to look at the flowers and appreciate the beauty of the now. A large chunk of rose quartz by the statue of Archangel Uriel caught my eye. I thought about the earthquake's epicenter in Mineral, Virginia. Rose quartz is a stone for healing the heart. Mother Earth's heart is in need of healing.

Another casualty of the quake were the spires of the National Cathedral, also the highest point in Washington D.C. Three of the cathedral's four corner spires on the central tower cracked and fell on the roof. Recently I'd learned about the Cathedral and Archangel Michael. Today I did a search and found a website with photos of limestone statues of Archangel Michael on the left holding a sword and Archangel Gabriel, on the right, with a scroll. 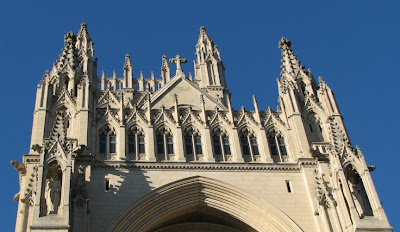 The National Cathedral with Archangel Michael on the left and Archangel Gabriel on the right. Photo from dccathedral.com 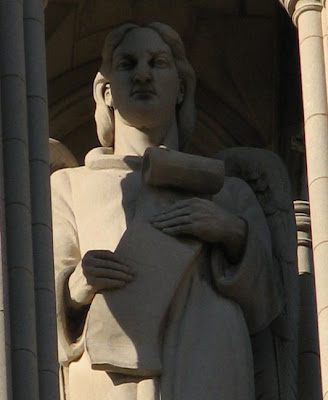 (Archangel Gabriel with the scroll, photo from dccathedral.com)

In the wake of the earthquake comes a reminder from these inspirational landmarks to put first things first.