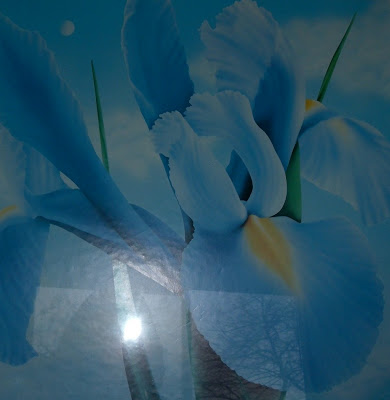 Shortly after beginning my spiritual journey, irises became an important sign for me. Whenever an iris appeared on my path, I took it as a symbol that I was being lead in the right direction, and to keep on going. Even though things were a bit unsettling, they would work out in the end for the highest good of all. And as time passed, I began to see this was true. Then one day, many years later I came across this poster at a thrift shop.

I loved it right away. The iris is reaching up, far beyond the earth, rising to greet the moon, the divine feminine. Iris is also known as the Goddess of the Rainbow and late this afternoon we saw a lovely rainbow. A sign of God's promise.

These are time of rapid, exciting change. I spent the afternoon gardening. Afterwards I had a caterpillar crawling on me at three different times. The last one appeared in my lap as we were driving to get pizza. Stopping in the parking lot, we sent him on his merry way in the bushes. Elliot said, "Caterpillars sure love you."

I began to wonder if I wasn't being shown metaphorically that although I'm a caterpillar, my destiny is to become a beautiful butterfly, soaring in a brand new light body. That makes the journey well worth the effort, don't you think?

Then late this afternoon while watering the garden, I was surprised to see that my African Iris plant had bloomed, a lovely white. A friend had gifted this beauty to me on Sunday. Some one once called flowers, God's hieroglyphs or floral apostles. They do make the heart smile.

Enjoy your day with the Angels. Happy Spring Solstice!