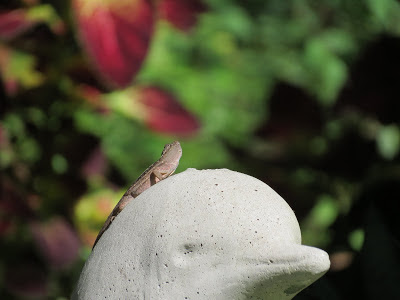 (Lizard in the Garden last Spring)


It's hard to know exactly when my fear of lizards vanished.  I'd become familiar with the little blue and yellow striped ones while living on the farm at Virginia Beach.  Often they could be seen basking on a rock in the flower bed, enjoying the warmth of the sun.  I began to see them as cute and amusing...although the last thing I wanted to do was to touch one.

It turns out those three years were good training for a future move south I knew nothing about.    Now living in Florida, lizards are a natural part of the landscape. Often posing on top of the garden statues or scaling the exterior walls of the house or the patio fence. I found myself becoming rather fond of them at a distance.

The balance in nature shifted when a couple of cats adopted us.   Apparently they had been living in the crawl space underneath the house.  When we began to feed them I thought the lizards would be safe.  Yesterday afternoon I was sitting outside with a friend, when Mr. Paws caught a small one in his mouth and began to toy with it. The lizard froze, playing dead and the cat waited, wanting to play.  I silently asked the Angels for help.  This is supposed to be a peaceful place.  All God's creatures can move in harmony. I affirmed.

I knew it was important not to interfere with nature, but still...

When I looked again the lizard was missing!  No one saw him move. Sniffing the ground the cat couldn't figure it out and neither could we.  Then I happened to look down at my pant leg.

The lizard clung to my jeans, looking up at me.  I could almost hear his loud cry for HELP!  His tail was missing, but he was alive; and it would grow back.  Now, there was hope. It was a bold move on his part.

My reaction surprised even me.  Why wasn't I jumping up out of my chair, screaming and brushing him off. But I knew in that moment that I was the answer to my prayer.  Seeing his panic, I reassured him to hang on.

He clung to my stiff leg as I carefully walked through the mulch to the far side of the woods.
Somewhere along the way, he let go. The cat now far away still sniffing the patio.

I must admit when it was all over, I began to cry. I wasn't exactly sure why.  Maybe it was because my love for that lizard exceeded my fear of him and in that moment I was transformed.

Angels often teach us lessons in nature and I was so happy to be used as an angel to the rescue.

P.S. In Animal-Speak by Ted Andrews, lizard teaches to listen to your own intuition before you get swallowed up in what is not beneficial for you.   You will see things that others may miss.  You will hear things that are not being said. The lizard also teaches detachment. (Their tails come off in order to survive.) Sometimes we must separate ourselves or part of ourselves to be able to do the things we must desire to do. Lizard is also associated with dreamtime.
Posted by Rae Karen at 6:56 PM