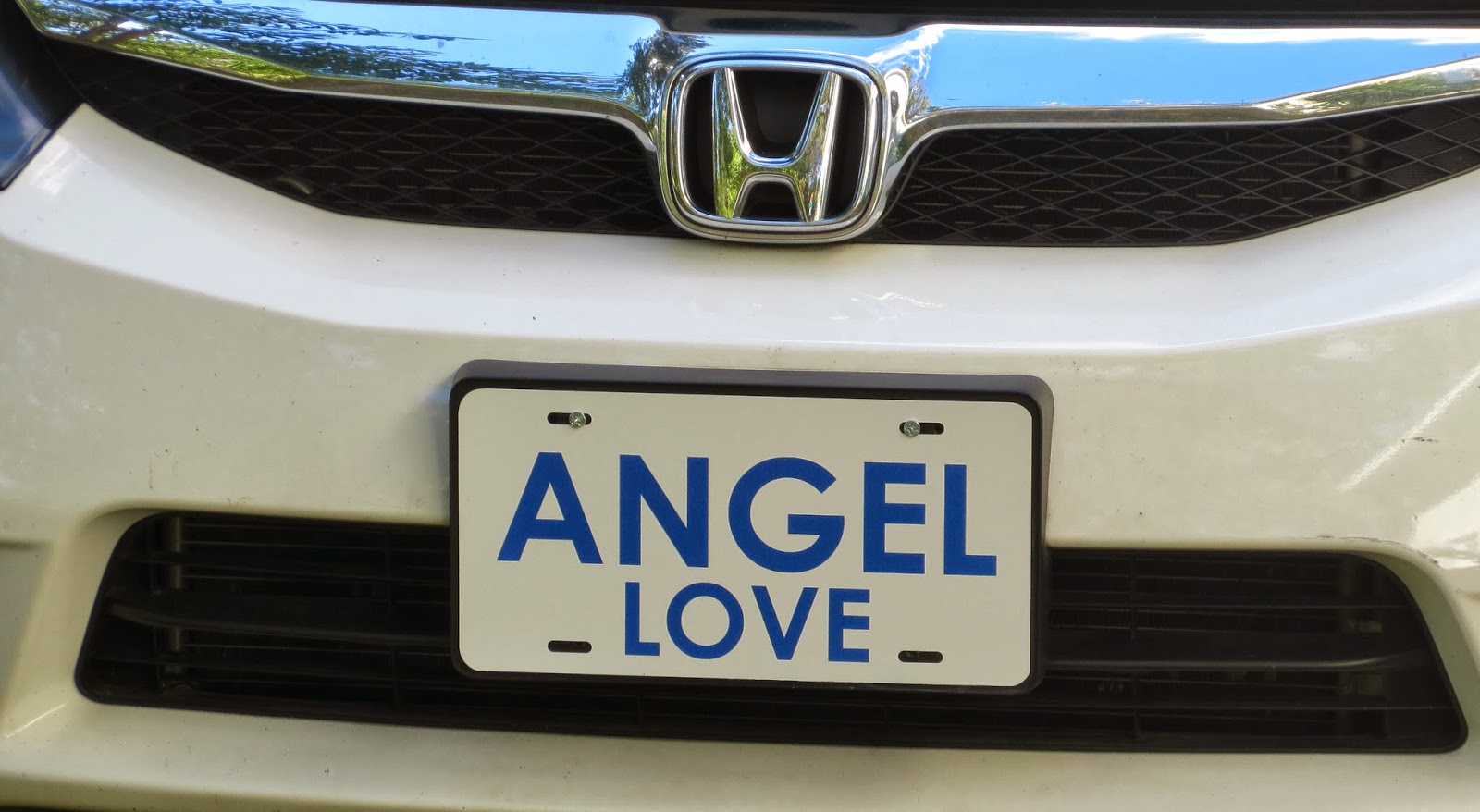 Sunday we dropped my 95 year old Mother off after lunch.  I had plans to work in the garden.  On the way home, Elliot and I stopped at Ace Hardware to buy mulch.  My energy has been low lately and working in the yard perks me up.  The Ace Hardware man loaded six bags of mulch into the trunk. When Elliot put the key in the ignition,the engine turned over and died.  A key icon flashed on the dash board.  A symbol we were not familiar with.  The auto manual said the mobilizer wasn't recognizing the key.  It would need to be reprogrammed at the dealership. I thought for sure my key would work, but when we tried it, the same key icon flashed, and the car stalled in the parking space again.

The angelic clerk in the store came out to help.  He gave us some instructions for turning the key.  It started right up, long enough for me to notice the clock was 1:11.  You're our angel, I told the young man.  He frowned, "But it's not holding."  Sure enough the car died.

I know angels often speak to us in number sequences.  This was one I was familiar with!  Doreen Virtue had written in her angel books that 111 is like the bright flash of a flash bulb.  It means the universe has taken a snap shot of your thoughts and is manifesting them into form. So watch what you're thinking.

I knew it was important to stay positive!  Ace Hardware is located  across the street from our church. While sitting in the car as Elliot was on the phone with Honda, my attention was drawn to one of the stone tablets on the church. The words stood out more so than usual:

"Ye shall know the truth and the truth shall make you free."

In that moment, I had a flash of insight. The key to a positive outcome was to stay in the now and let the truth be what it is.  God is Love and we could never be separated from His Love.

The dealership service center was closed on Sunday.  But we had an idea to go home and get the valet key.  Hopefully, it didn't have the same chip.  So we enjoyed a brisk walk home, thankful for the clear skies and temperate weather.  It turned out that key wasn't the answer.  So, Angel Love spent the night facing traffic on busy Woodland Avenue.  Before going to sleep, I asked the angels to watch over her and if anyone needed a reminder of the angels, they notice the Angel Love license plate.

We planned to have her towed with Triple A the next day.   Whenever a worry thought popped up that something major was wrong with the electrical system, I would affirm: Divine Mind knows how to fix this car.

The timing of all of this was interesting.  There were other factors that figured in.  We had to rent a car to take Mom to an early doctor's appointment on Monday. Afterwards, we were guided to call Triple A around 11:00.   The right tow truck driver appeared at the right time with the right solution. He took the keys and jumped in.

VRRROOM! It started right up and kept on running!  I told him what had happened yesterday.  He looked at me with a gleam in his eye: That was yesterday.  This is today!  (A kindly reminder)

Being a doubting Thomas, we suggested he try the other keys.  The engine conked out after starting it with the 3rd key.  He thought the battery was low, so after a jump start, he suggested driving it to a local auto store.  They would check it out for free.  He was right! We bought a new battery and the installation was free, saving us an expensive trip to the dealership.  The keys worked fine.

That's the way the angels work if we listen in and follow their prompts without reacting.  Getting angry, fearful, or reacting negatively can cloud the screen and we can't pick up their signals on the best way to go.
I'm so thankful to know that we are always in the loving presence of the angels, God's messengers of His pure intuition.