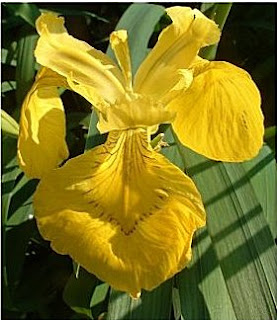 
Yesterday's email brought another iris message. My niece had photographed her baby held in the arms of a loving aunt in a flower bed of tall irises--an unexpected surprise at their new residence. I love the synchronicity in bloom --irises are on parade this Month of Celestial Reflections!

In my new book by Vincenzina Krymow, Mary's Flowers, Gardens, Legends & Meditations, I learned that the fleur-de-lis (lily flower) has been known as the lily of France since the 5th century when Clovis I, king of the Franks, adopted the iris as his emblem after it saved him from defeat by the Goths.  He was trapped between the opposing army on one side and the Rhine River on the other.  Clovis prayed to the Christian God, vowing to convert to Christianity if he could he saved.   As he finished his prayer, he noticed yellow iris growing far out in the river--so he knew the water was shallow.  He took this as a sign from God and marched his troops across the river to safety.  He and three thousand followers became Christians on Christmas Day that year.

Often God answers our prayers in unexpected and simple ways, giving us inspiration to solve our challenges. We need only ask, watch, and follow.