Star of Bethlehem: An Angel Message 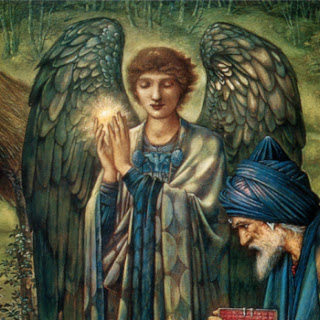 I want to share an experience I had several years ago regarding a star at Christmas time.  After reading Christ and Christmas, a picture book by Mary Baker Eddy, the seven pointed Star of Bethlehem emblazoned on the cloth bound antique book made me want to find a similar star to keep as a symbol of the ever present Christ Light throughout the year.
A search began at the stores, but I couldn't find what I was looking for.  Rather than be discouraged,  I returned home, knowing the angels would  guide me. Something was up--because that afternoon's mail brought a National Geographic catalog, and we didn't subscribe to the magazine. Turning the pages, I found a beautiful clear glass Moravian Star, handcrafted in a stained-glass studio in Nazareth, Pennsylvania! It represents the Star of Bethlehem with its many points.

But more was to come. That night a star appeared.  It woke me up, shining above the rooftops. Somehow it was shining through the window slats and the Venetian blinds were closed. Strange, but the slats were turned upward, and starlight squeezed through the cracks. I got up to take a closer look.  Gazing at its wonder, I was amazed to see how one bright star can light up the dark, bringing hope and a promise of things yet to come.

So, never give up.  Keep on asking the angels for help in shining your light.