The Cowbird, A Free Spirit: An Angel Message 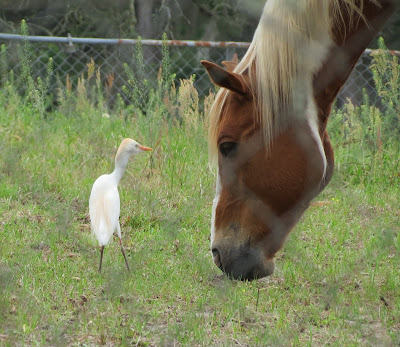 A cattle egret (cowbird) and a horse hang out together on Easter weekend.


The first time I saw a cattle egret, he stood like an ornamental hood ornament on a car parked on busy New York Avenue downtown.  The light turned green and he flew away before I could capture his photo. But I thanked him for the message: "It's time to get yourself out of park and get back on the road.  Get moving!"

A few days later, he made another deliberate visitation.  Swooping down, he landed on a tree outside a restaurant where a friend and I were celebrating her birthday.  Curious, he watched us from the tree limb.  Satisfied, he flapped his white wings, and gracefully flew above the Main Street traffic, off to do some more window shopping.

These birds are rarely seen around here so when this one appeared in a pasture hanging out with a pent up horse, I thanked him for another message.

Horse represent movement.   Another message that it's time to giddy up!