Hammering Away, Up On The Roof: An Angel Message 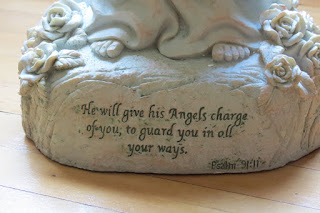 Many years ago I learned a memorable lesson.  At the time, we were living in an upstairs duplex at Virginia Beach.  The beach cottages next door had been leveled, and construction was underway for   three-story condos.  A robust, young construction crew began work early one morning.  The radio was blaring as they hammered away. Waking up to the racket, I was really annoyed, but caught hold of myself. I decided to turn my anger into a blessing. When something disturbs my peace, the first person I need to work on is me. I asked the angels and Jesus to watch over the men while they worked, remembering that he was a carpenter, too.

The following week, Elliot and I arrived home to find a police car and ambulance in the driveway next door.  A construction worker had fallen from the roof.  The police and rescue workers were smiling, shaking their heads in disbelief. Turns out, the construction worker was able to get up and walk into the ambulance after a three-story fall.

A few weeks later, I saw one of the workmen outside.  I asked him how his friend was doing. "Pretty good." He said.  "He only chipped a tooth!"

"Sounds like a miracle," I smiled, silently thanking the angels.

He agreed, with a grin.

For many weeks, the crew quietly worked on the roof. Then one Sunday morning at 7 a.m. rap music boomed from the construction site. Elliot was ready to ask them to turn down the volume.  But we decided to call on Archangel Michael for help. These young guys were loaded with  testosterone,  and  perhaps unaware that others nearby were sleeping.  We also asked the Holy Spirit for a holy relationship with them. This way the answer would be a win-win, for the highest good of all.

The loud rap music continued, but we moved beyond our comfort zones, asking for peace instead of this. Later while I was taking a bath, I could hear the radio. It was now tuned to a different station. The words over the airwaves that Sunday morning were about the power of God. I couldn't believe it. I dressed quickly and asked Elliot to listen. I didn't trust my own ears. But it was true.

That experience helped me build more faith in the power of God, not only working in my life but the lives of others when included in prayer. In Psalm 91:11 we have assurance that if we abide in the Secret Place of the Most High, "He will give his angels charge of you to guide you in all of your ways."  Now that's a promise worth hammering into my consciousness every morning in gratitude.


(Reprint from September 2002 The Lighthouse of Peace)