The Weight of a Snow Flake 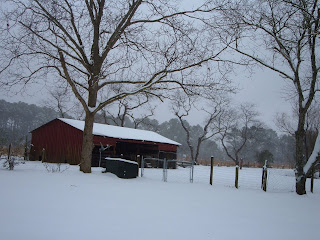 I love snow...even after living in Fairbanks, Alaska for two years, with a record breaking snowfall of 165 inches the first winter. So this morning when I woke up and found the ground blanketed with 6 inches of white powdery snow, it was magical. Snow transforms everything, quietly covering all. Flocks of birds came by to feed out of tins I set on the ground.

Later I came across an old 2004 journal with this newspaper article that seemed perfect for the blog today.

The Weight of a Snowflake

"Tell me the weight of a snowflake," a coal-mouse asked a wild dove.

"Nothing more than nothing" was the answer.

"In that case, I must tell you a marvelous story," the coal-mouse said.

"I sat on a branch of fir, close to its trunk, when it began to snow--not heavily, not a raging blizzard--no, just like in a dream, without a wound and without any violence. Since I did not have anything better to do, I counted the snowflakes setting on the twigs and needles of my branch. Their number was exactly 3,741,952. When the 3,741,953rd dropped on the branch--nothing more than nothing, as you say--the branch broke off."

After having told this story, the coal-mouse ran away. The dove, who is since Noah's time an authority in peace-matters, sat thinking about the story a little while, and than spoke to himself: "Maybe we are only missing the voice of one person to come to peace in the whole world."

Wishing you a peaceful, joyous day with the angels.