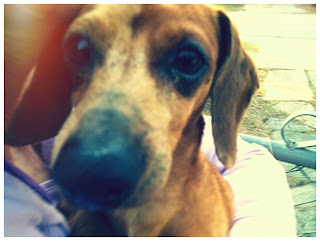 What could be causing a traffic jam on our street? Elliot and I wondered from the front porch. It was most unusual and the cause became apparent as a little brown dachshund dodged cars and ran into the woods across the street. A beautiful young blonde driving a shiny black sports car tried to take command of her charge. Giving up, she made a u-turn, stopping to talk to a neighbor tinkering on his car across the street. Then she drove away.

I waited in the yard watching the woods, asking the angels for help. Soon the little robust dachshund dashed back into the street and totally ignored me as I clapped trying to corral him into our fenced yard until the owner returned.

In despair, Elliot and I watched him race down the middle of the street, causing a stir in traffic. Cars braking, left and right. It was hard to watch. Then I asked for God's creations to work together in perfect harmonious action. His little short legs had speedily carried him down the road. He was like a brown speck, blocks away. Again, we asked that the angels watch over him and deliver him safely.

We thought we'd surrendered the situation, but something had us stay with his plight. Elliot decided to rig up a leash. We'd go out to look for him in the car. Suddenly a blue SUV pulled up in front. A woman joyously shouted, "We've got your dog!"

The door opened and a young red haired boy was holding the shaking little puppy in his arms.

I was so surprised how quickly he was delivered! This was truly an angel assignment. When I explained what happened, saying I hoped the owner would be back, mother and son smiled and drove away, leaving this little feisty bundle of quivering love in my arms.

The hard part was over. It was just a matter of time before the owner would come back. I stood in the front yard holding him, waiting and watching the cars go by.

But the minutes got longer and it was getting cool, so I put him in the sun porch and returned to the street to wait alone for her.

Then I got another one of those angel messages. Go introduce myself to the neighbor whom the dog's owner had spoken to. Maybe he could help?

I was glad that I did. Manny told me she had gone to pick up her husband in Orlando and would return in a couple of hours. She asked him to keep the dog if he showed up and she would be back later, offering to pay him to sit for the dog, but he said no problem.

Manny was friendly and came over to meet our runaway, Indy. I had nicknamed him for two reasons. The high speed in which he raced, expertly dodging oncoming traffic. And also for Indiana Jones (Indy) because of his adventuresome nature, jumping out of a car, etc.

My son, David, took one look at the situation. "She's not coming back. You're going to have a house guest tonight."

Our cat, Angel, gave me a look, like You've got to be kidding. Her friendly hiss and his bounding spirit were no match. I thought my son was just being negative. How could anyone abandon this precious little canine? I thought as I watched him sleeping soundly swaddled in a soft purple blanket on the wicker loveseat beside me. So trusting and innocent. My heart was melting. Around 9:30 I knew she was a no-show, now over two hours late. A quick trip to the store for a leash and collar and dog food from our neighbor had us ready for the night.

As it turned out Indy slept in David's room and Angel cat slept on our bed. The house was quiet and peaceful as I claimed again all God's creations being harmonious.

The next morning I had to do some soul searching. This little fellow was just like my childhood dog, Waldo. I knew I couldn't keep him. It wasn't fair to our cat who wasn't exactly behaving like an angel to our guest. Sadly, we took down our note on the neighbor's door. The young woman for whatever reason did not come back for her pet.

What to do next?

Then I remembered a cute little house called The Ark, a sanctuary for furry friends that I often noticed while driving down Woodland Blvd. I was nudged to call them and to take Indy there. When we walked in the door, a loving woman greeted us, so excited that she had the perfect home for him. Just the day before a woman came in looking to adopt a sausage dog. She was a day early. "He is so cute," the Ark helper smiled, holding Indy in her arms. "And I still have her phone number."

What's his name? she asked me.

"Indy" I said, explaining why.

"That's a great name," she grinned.

After a tearful goodbye, I got to thinking about all the events that led up to his rescue. It was all about divine timing and teamwork. Indy had made it safely to the Ark. The symbolism was perfect. Divinity is always ready. Semper paratus. We only need to do our part: Love Mother/Father God and love one another.