I Spy Something Green: An Angel Message 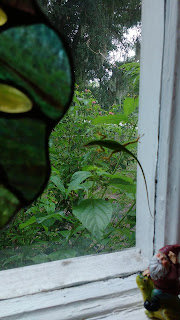 On long childhood road trips, my two brothers and I would pass the time playing a guessing game called I Spy.    Maybe you remember it?

The one spying would choose an object, naming only the color.  I spy something...blue.  The other players would quickly search for anything blue.  Is it the blue in the scarf?  Helpful clues like ... You're getting WARM. You're COLD... would indicate the range of the target.  Whoever guessed it would get to be the next spy.

Yesterday while sitting on the couch leaving a phone message for a girl friend (who had called earlier in search of a new home), I spied something bright green on the living room window ledge.

At first glance, the cute little anole appeared to be on the outside window ledge by the flowering lantana bush. Surprised by the timing, I mentioned the green lizard in my message to my house hunting friend.  Curious, I hung up to investigate.

A cute little green anole was inside the house...up on the window sill... by my writing desk. I had compassion for the little fellow.  Longingly, he stared out the window, spying nature in clear view, with no visible way of getting there.

Not wanting to frighten this fast moving lizard, silently, I collected myself, remembering that All Life is One Mind and moves in harmony.  God is All...so even this little anole's movements are ultimately powered by Infinite Intelligence.  If only I could meet him on that level of One consciousness.  Sounds strange, I know...but it's true.  (You may want to read Kinship With All Life by James Allen Boone. )

I softly talked to the frustrated lizard.   Soon you will be out there.

Elliot ran for a brown envelope.  And the little green anole stayed still on the window pane, looking at the great outdoors.  He was "WARM", so close to his goal.  Freedom.

The harmonic energy was holding as he listened to my words of encouragement.  Elliot returned ready to make a delivery, envelope in hand.

A green streak dashed across the inner window ledge, leaped onto the fireplace screen, and scurried across the hardwood floor.  The last thing I wanted was for him to roam free in the house.

An angel idea had me grab a soft paper pamphlet from the table.  It was more friendly than the wooden ruler Elliot used as a guide.

Scooting the pamphlet after his long green tail, to my delight, he was heading for the porch door. Elliot quickly held the open envelope on the floor maneuvering it in front of the little lizard, with me bringing up the rear.

VOILA...within seconds, our little green messenger had captured his freedom.  Back to nature where he belonged.

Elliot and I smiled, happy to have been of service.

The green anole's deliberate visit brought an on-line search of the esoteric meaning. What a surprise to learn that when threatened, it will change color.  Bright green turns dark brown.   As such, it can teach you to change your look and behavior to suit the environment.  Also, the green anole can symbolize a forthcoming love or relationships.  And, also signifies the closeness to come about in a current relationship. 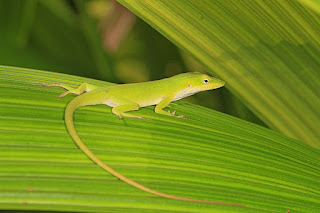 Green is the color of the heart chakra, a reminder that whatever we do, do it with love.