A Call for Love: An Angel Message

With the cooler temperatures, Elliot and I decided to get out and about a bit today. I suggested a drive to the local orchid farm. I had landscaped the side yard and wanted something special.

Getting out of the car, we wandered across the grassy field to the donkey pen.  A beautiful female was standing in the shelter of an open shed.  Shy, she kept her distance, and then slowly made her way toward the fence.  I didn't try to take her picture. Although I didn't reach out to pet her, it felt as though we had a peaceful unspoken communion.  After saying good-bye, we were heading toward the nursery when a loud wailing donkey called out.  HEE-HAW he brayed from his pen on the other side of the property. 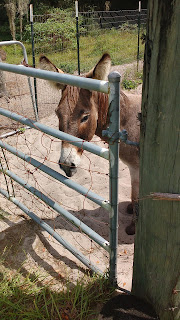 Recognizing a call for love, we hurried to greet him, too.  Seeing this young head strong lad, I  hesitated to reach out and pet him through the fence.  I wanted to, but was afraid.  When I admitted it, he seemed to try to help.  He stuck his nose through the gate rungs in front of me. 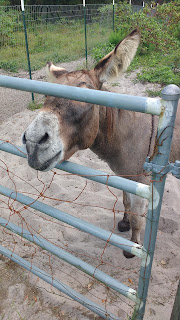 But he tried even harder...

I laughed as he raised his snout over the top railing to look me in the eye.  That did it!  How could I resist a face like this? 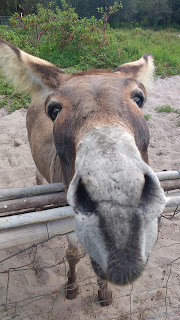 Slowly I reached out and found myself stroking his soft face, thankful for the lesson he was teaching me, not to be afraid to love. 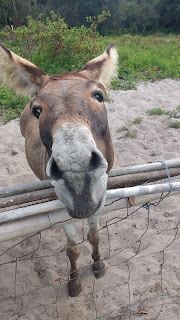 Funny thing happened later.  When Elliot and I  tried to enter the orchid nursery, the door was locked. They are closed on Mondays! But this little burrow's heart was wide open to love. It was just what was needed most.

Donkey has to do with will, I later learned.  Hmmm...