What severe contrasts we’ve had in the weather lately.  Sunday  morning  brought high winds pruning the heavy old fronds off the tall palm trees.  Rain poured in so fast the front yard became a rush of swift flowing little gullies. I was thankful for the Holy Spirit, and for knowing that “God is the strength in which I trust.”  In the midst of the storm, God was there, as always…nothing in Truth had or could ever change.   I’ve also found Psalm 91 to be a powerful comfort during these trying times.  “For He shall give his angels charge over you….”

Late Sunday afternoon, the sun broke through the clouds…a grateful sight.  The sweet sandhill family had weathered the storm.   The angels must have tucked the trio under their wings during the high winds. :-D

Then today, while parked by the lake, beneath the bough of an old tree, I saw something else that brought a smile.  A dragonfly out on a limb!

My good friend, Joanna, a writer, often sat at the picnic table by the lake while editing her books.  Her thoughts were clearer in nature.  She had written a book on Passing On shortly before she did so in 2018. Dragonflies were always her special messenger ever since her husband had passed on shortly before I met her in 2011.  Whenever a dragonfly appeared, it was a comfort, as though Jack was sending a love message.  He was still around watching over her.  Joanna had many unusual encounters with these lovely winged ones who would pay her a visit. One showed up in her hotel room while she was in deep mourning shortly after his transition.

So today when I saw this beautiful dragonfly, I immediately thought of my dear friend.  “Hello, Joanna!” I smiled, looking through the camera lens.  With two sets of wings, I recognized it as a damselfly, even more appropriate as a messenger for me.  The damsel appeared to have a hint of turquoise on its head, a favorite color of hers.  To my delight, she rested on a bare branch, soaking up the sun light on high.  Together we looked out at the serenity of the lake on a beautiful day that had a touch of heaven itself with a gentle breeze.

Usually damselflies and dragonflies are busy flitting here and there…but this visitation was special, and I knew it.  When it was time for me to go, she, too, departed…in her iridescent jeweled wings, leaving me lighter.

Back at home, when the photo was uploaded, it might have been just my imagination, but it seemed as though the damsel had turned her head, and was looking right at me. 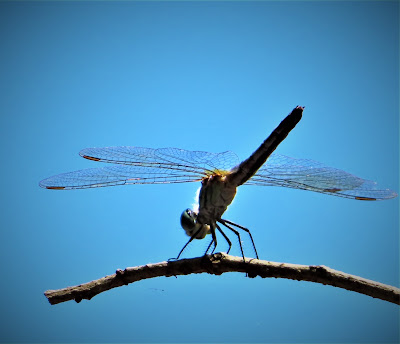 I’m so thankful for the gifts that come to assure us that our love ones go on and on…and that there can be no break in the link of eternal Love.

“Dragonfly reminds you that you are light, and you can shine in powerful ways if you choose to do so.”  --Ted Andrews

May you find peace and joyful moments today with your Guardian Angel by your side.