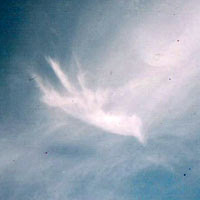 The Zohar teaches about a vast system of angels which make up a communication network traveled by both positive and negative influences. This network is an interface between the physical world and the Upper Worlds. Everything in the physical world is governed by angels, including every blade of grass, every creature in the sea, and mankind as well.

Because our five senses are so limited, the presence of angels is invisible, but their power doesn't go unnoticed. In Kabbalah, we learn positive actions bring positive angels. Likewise, negative actions (all blockages, turmoil, and distress) attract negative angels. The good news is we have a choice. How we behave determines which angels are aroused in our world. Whenever we react, we are opening the door to negative angels. If we can remember to stay positive and pro-active, we draw positive angels to us. It's as simple really as like attracts like.

Knowing this is helpful, especially when confronted with car trouble on the highway. Often it can bring out the worse in me, especially if a passenger in the back seat is my dear eighty-six-year old Mom on one of the hottest days of the summer. And on the first day of her vacation. She was coming to spend a week with us at the beach. We left Alexandria early and were making great time. The trip had all the ambiance of a perfect day unfolding. Mom was humming Rock of Ages in the backseat to the music playing in the tape deck.

Half way home, the car began making a strange noise, slowing down on Interstate 64. An exit was coming up at Toano near Williamsburg. Immediately Elliot pulled off and we cheered the car onward, calling on the angels. Somehow it coasted into the McDonald’s parking lot and stopped in a parking place.

After calling AAA, we ate an early lunch inside air conditioned McDonalds. If we had to have car trouble this was a cool place to be. An hour later, the driver showed up to tow our car. His morning was a busy one, but he was friendly and helpful. Our car needed towing to a garage. There was only enough room for two of us in the cab of the truck. So, Elliot sat in our car (Goldie) on the flat bed truck. Curious, folks in the parking lot gathered around. We decided to have fun. I snapped a picture of Elliot on the Rocky Road Tow Truck with the window rolled down, waving to the smiling crowd, but the camera didn’t work either.

“I can hardly wait to see the good that’s going to come from this,” I said, climbing inside the cab. Mom somehow maneuvered the high step, too. I think the angels must have given her a boost. Zooming along the back road to the repair shop, windows down, an angel ornament danced in the wind on his rearview mirror.

“See Mom, the angels are with us.” I was so thankful we weren’t stranded in the hot sun.

She laughed, holding down her windswept hair. Riding along the country road, we sang a few lines of “Country road, Take me home to the place I belong.” At the repair shop, we got bad news. The transmission was shot. It was a case of just accepting what is. My brother David who lives in Richmond came to the rescue. We spent the night at his house and had a wonderful dinner out with his family.

A few years later, while searching the web for angel pics,I found the Toano Angel! The synchronicity was amazing, reminding me that by staying positive, we can have a smoother, happier ride through life with the angels. Not that there won't be bumps, but the angels make good shock absorbers.

Email ThisBlogThis!Share to TwitterShare to FacebookShare to Pinterest
Labels: angels