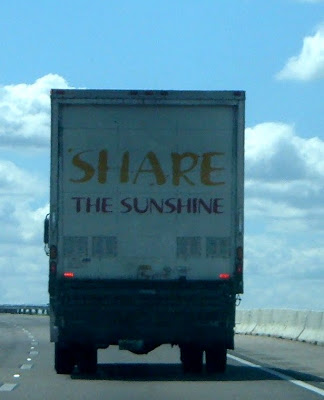 Birthdays are a time of special celebration and the presence of the angels seem more palpable. Last week on Elliot's birthday, he was suddenly inspired by the beautiful weather to take a road trip. The Angel of Spontaneity hurried us out the door, and we were heading for beautiful Bok Tower in Lake Wales. A 50-acre historical site on central Florida's highest point, known for its beautiful gardens and singing tower. Enclosed in the tower are 60 carillon bells, one weighing almost 12 tons. A perfect place for a musician to spend his birthday.

On the highway, we followed this truck:  SHARE THE SUNSHINE.

When we arrived at the gate, Bok Tower had just opened at 8 AM.  With the car windows rolled down, the heavenly fragrance of orange blossoms was intoxicating as we drove through orange groves. Off in the distance, high on a hill,  the 205' pink marble tower appeared like a spire from King Arthur's castle. Bok Tower is better than the Magic Kingdom, if you enjoy nature, music, and beautiful flowers and trees. 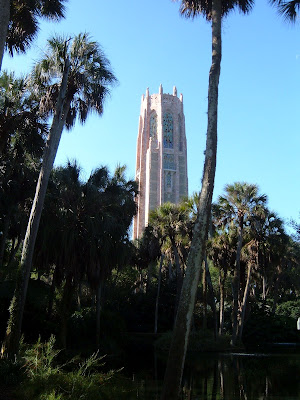 This lovely spot among the trees had once been an arid sand hill where Bok enjoyed taking evening walks to the top of "Iron Mountain" to enjoy the sunsets. An idea came to him to preserve the hilltop and create a bird sanctuary, a place of beauty and serenity. By doing so, he would also fulfill the advice of his Dutch grandmother.

"Make you the world a bit better or more beautiful because you have lived in it."

President Calvin Coolidge dedicated the Tower and Sanctuary in 1929. Since the Singing Tower is in a bird sanctuary, Florida birds such as the pelican, the flamingo, the heron, the goose and the swan are sculpted in a band that circles the Tower. Eagles are also part of the design, half way up, because the Singing Tower is a gift to the nation. Some of the greatest masters were commissioned by Bok to create this magnificent edifice. The dove, a symbol of Edward Bok's commitment to world peace recurs in many styles and material throughout the tower and gardens.

We were enjoying breakfast as we sat alone in the empty cafe that overlooks the beautiful gardens. A holy hush, a strong sense of peace surrounded me as I looked out on the flowers that morning.  Soft instrumental music made the atmosphere even more serene. I looked down by the napkin holder.  To my surprise, a small business card had been placed there. 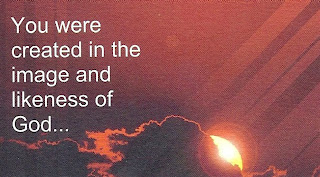 "You were created in the image and likeness of God..."

It was an unexpected, loving reminder of what I've been trying to learn.  "I am made in the image and likeness of God." I joyfully laughed as if being touched on the shoulder.  Curious, I looked around to see if the card was on the other tables, but ours seemed to be the only one of choice.

I was so thankful for the angelic touches that help keep our focus on the Truth.  Everything begins with thought.  If only I can keep my mind on my true Identity as a spiritual idea in the Mind of God rather than a mortal of flesh and bones, then life can be experienced now as heaven on earth, and what joy to share the sunshine as a light of God.

My Grandmother, in the heavenly choir, no doubt was smiling as we listened to her favorite hymn played by the bells, How Great Thou Art.