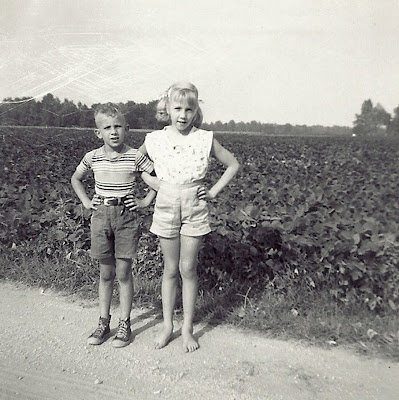 (Rex and I visiting our Grandparents' farm)

My brother Rex is celebrating his birthday today. Growing up we didn't realize how his life would touch the lives of millions, bringing hope and light into the world. In the mid-90's, he began researching why people from all walks of life and from all religions were reporting direct contact with angels in unprecedented numbers. For the better part of a year, he and his film crew traveled the country compiling film footage for what would become a television documentary, Angels: The Mysterious Messengers aired on NBC.

In his book based on interviews from the film, Rex concludes: "But the angels do not call us to heaven. People are not giving themselves over to an esoteric notion, but rather are taking inspiration and responsibility for the shaping of their lives. It is a life that calls for vigilance and compassion and understanding and courage. I have been among these mysterious faithful who have cast their lot with their faith. And the work is being done. There are beings out there building a better world. And many of them are angels."

We thank you, Rex, for being one of them. Happy Birthday.