Angel Messages from the Birds

It's amazing how quickly our thoughts are manifesting these days.  With the acceleration of time and the majestic solar eruption that occurred yesterday, June 23, there is a definite quickening going on.  And, maybe you too have noticed that  the angel messages are coming with more clarity and synchronicity.

Yesterday I found a shiny 2012 quarter in the parking lot at a nearby plaza.  Elliot and I had stopped to get a sandwich, and there it was right on my path.  A bird was pictured on the back-- one of the new state/territorial coins.   Thanking the Angels, (usually I find a penny or a dime) so I knew the quarter was about trusting God with something big that could be coming up.

After lunch we went to the lake.  There was lots of activity as you can see: 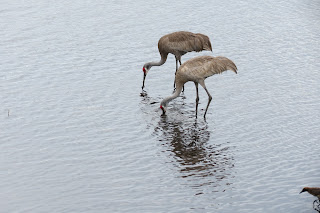 A pair of cranes stopped to peck away for a shellfish lunch.  Their two teens had flown the coop, off on their own adventure.  Crane is symbolic of longevity and creativity.  The sandhill red cranes have red on their brows, an indication that our intuition will be getting stronger. 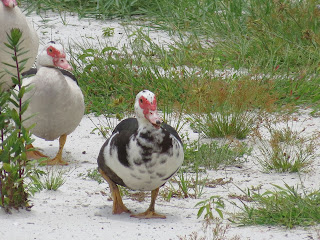 The ducks were making tracks in the sandy beach.   Ducks are a reminder not to let our emotions carry us away, instead let them roll off like water on a duck's back. 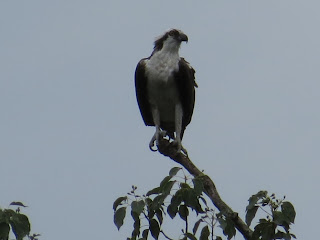 I had wanted to take a picture of the osprey, but they were so active, searching for food, hovering above me, I couldn't steady the camera to track him.  Having given up, I put the camera away and just enjoyed the peacefulness in nature.  A short time later, I heard a familiar whistle that became so insistent that I walked out from under the overhang.  To my delight, high in a tree,  I saw this hawk.   I was so excited that somehow I accidentally hit the movie button on the camera and captured his whistle, too. But the images are too shaky to share.

At home, when I downloaded the camera, I saw it was a young eagle, not a hawk!  Seeing his pose,  reminded me of the quarter I'd found.  With a magnifier, I could see that the bird on it was a Puerto Rican parrot behind a plant, but then I was amazed to find a little tree frog called a Coqui also was shown.  Remembering FROG is an acronym for Fully Rely On God, I was so thankful to the angels for the message.

The Golden Eagle (not sure if this is actually one) is symbolic of the New Golden Age. It represents St. John in the Christian tradition. Nostradamus predicted this new Age would begin in 2015.   The eagle is the spiritual sigil for majesty, mastery, and unimpeded progress, victory, splendor, and strength.  All the attributes of our Spirit.  We are spiritual not material beings so not to get fooled by the false perceptions of our five senses.

Enjoy your day with the Angels, listening and watching and enjoying their loving Presence.

P.S. The parrot is a wise old bird.  With its deafening squawk, it rudely awakens us out of our sleep of complacency and spiritual idleness, and urges us to aim for higher things. (Angel Messages, The Oracle of Birds by Claire Nahmad)