Feeling Stuck? This One's for You: An Angel Message

Animals, in unusual predicaments, that cross our path can bring messages of guidance, hope, and understanding just when needed the most.   So, I try to pay close attention and become the observer when these oddities happen as they are purposeful and come with intention from the angels.

For instance, a steady heavy rain began last night and has continued most of today. The plants and trees are getting a much needed soak.

Early this morning, I put out a bowl of cat chow for our favorite customer, Gus, the stray orange tabby who lives underneath our house.  To keep his food dry, I set it under a brown rattan chair on the back stoop, something I do for him on rainy days. But this morning, Gus apparently had more sense than to venture out in the deluge.

Later, when I looked out the backdoor window to see if he'd been by, I caught sight of something brown floating in Gus' white water bowl.

At first glance, it looked to me like a fallen leaf from the old camphor tree.  The more I watched the rain pelt the brimming water bowl, I began to see something unusual.

That brown leaf began to take the form of a little tree frog.  His hind legs and front legs were stretched out.

A  floating frog in Gus's water bowl seemed like a deliberate message, and not a positive one at that.

I called to Elliot to confirm my sighting.

Together, we stood at the door window, watching the raindrops splash into the china bowl. "Is that a tree frog?" I asked.

"Yes," he said, as we stared at the little amphibian who appeared lifeless, with no means of self-propulsion, at the mercy of steady rain drops sloshing him about in the rippling water.

I ran for my hooded rain jacket,  hoping he was just cold and resting from trying to make it happen all on his own.

Gently, I reached down in the pouring rain, and quickly tipped the water bowl on its side.  "Here you go!"  I said, as he spilled out onto the wet ground.

My heart took a big leap, along with that little frog, as I gratefully watched him pop up on his feet, and hop away on a brand new adventure. 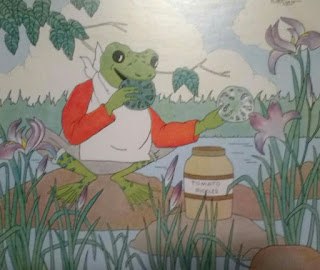 I was so thankful for the lesson to Fully Rely On God.  F.R.O.G.  Miracles do happen.

Later, I remembered, a quote I'd read first thing this morning: "Just be with what is."

So don't lose hope if you're feeling forgotten and stuck in a hopeless situation, just free float, rest in God, and watch what will happen.