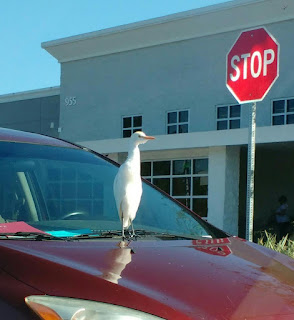 Okay, there are signs, and then, there are signs.  Timing is everything.  And, some angel messages seem more deliberate than others.  This morning I had a good laugh at a rare sight.  This animated white cattle egret was not in its usual milieu, a cow pasture.  A place where it typically shops for bugs and other pests.

Instead, he was making a spectacle of himself in the busy grocery store parking lot.  Posing on a  car parked near ours, his radiant white image was mirrored on the shiny hood of a maroon car.

Hoping, he wouldn't fly away, I knew this could be an angel blog and asked for their help.

As I zoomed in on his snowy feathers, I noticed the red STOP in the sunlight.

Something was up.  The last angel blog had featured the symbolism of a STOP sign, as well as the acronym for HALT.  A remedy for keeping peace during the holidays.

Now, here a cattle egret was driving the message home again to HALT.

Whenever we are feeling Hungry, Angry, Lonely, Tired (H.A.L.T.),   STOP! HALT! before reacting and losing our peace. The ego strikes when we are most vulnerable, so beware of its tactics and choose to step back, pause, regroup, and stay centered.  Ask to see peace instead of the looming upset.  Everything is either love, or a call for Love, except in the ego's judgment.

I was thankful to the Angels for another Heads up!

Later, a little research revealed why these birds make such good cow companions.  The cattle egrets are attracted to insects.  As the cows move through the field to graze, they stir up the bugs in the pasture. The cow egret can then easily scoop up a big meal of pests with little effort.

I learned a new word about their symbiotic relationship. It's called commensalism which literally means to eat at the same table.  It's a win-win.  What benefits one, benefits the other.  They work well as a team.  As do we when we invite the angels to join us on our daily walk in gratitude for our heavenly companions. 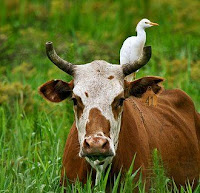