The Universal Spiral: An Angel Message 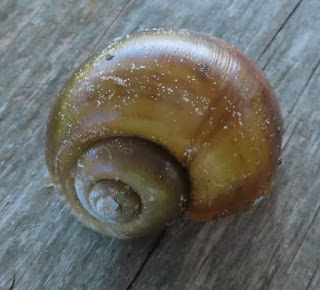 The first time I saw one, the impressive size of the shell made me wonder, Am I moving too slow in a BIG way!?

A snail is born with a little piece of hard substance.  It's that little circular spot in the center of its shell.  As the snail grows, the shell naturally adapts to the proper size, by wrapping a soft substance that hardens into a another layer of shell for protection.

The spiral pattern is a universal symbol.

Life goes round and round, in a repeating spiral, but hopefully we are expanding our consciousness and growing more and more in spirit with each go-round.  The lessons may appear to be the same old ones, as we wind around and around, but we are changing, we are not the same, we are growing  stronger in spirit and improving with each successive rotation, coming up higher in consciousness.

Since snail carries its shell on its back like a mobile trailer, wherever it goes, it finds itself at home.
Snail reminds us that it's not how fast or slow we move, eventually we will arrive at our destination.  Home.

And, like the turtle, the dove, and the cherub combination that showed up yesterday morning, the angels invite us to go in peace and take it day-by-day in gratitude. 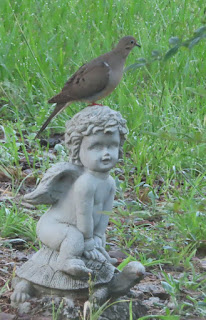