With Perseverance, a 2200-lb. Rover, makings it final descent to the Red Planet on February 18th,  red appears to be the color theme of the week.  It has nothing to do with politics as I sit here blogging in an old red sweater.  This morning a juvenile hawk delivered a splash of color.  It made a landing on top of the old dead tree as Elliot and I were discussing the timing of  NASA's latest achievement on Mars. A massive parachute, bungie cords, and retro rockets were part of the Rover's smooth landing in the crater where it will gather red rocks and look for past life during the next three months.

As for our winged messenger perched on the treetop, the angels surely had a hand in the long-range photo-op because the young hawk rotated his head to look my way just as I took the picture from the sun-room window.  It wasn't until later, when the photos were uploaded on my laptop, that I could clearly see what I got!  A big red tail feather sticking out like a calling card!  I laughed, as it instantly revealed the type of hawk he is. 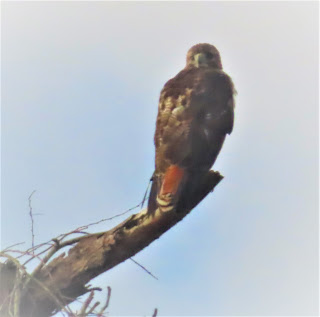 In hindsight, the color red brings to mind Valentine hearts and February is Heart Month.  The red-tail feather is perhaps a sign to come from our heart rather than from our head in relationships with others as well as with ourselves.

A review of its symbolism was meaningful.  To the Pueblo, the red-tailed hawk was known as red eagle.  To the Ojibwa it represented leadership, deliberation, and foresight.  According to Animal-Speak, the red of the red-tail reflects a greater intensity of energy at play within your life.  An intensity of physical, emotional, mental, and spiritual forces.  This powerful bird is a catalyst, stimulating hope and new ideas.  It also signals a need to be open to the new. The Red-Tailed Hawk can awaken visionary power and lead you to your life purpose.  A messenger bird, wherever it shows up, pay attention.  There's a message coming.

So take a hint from this bright red tail feather as a calling card for you. It has winged its way to your mailbox with a message of hope and creativity.  New ideas are coming to help you fulfill your life's purpose.   Keep on persevering. The best is yet to be.