A Slippery Climb for the Inner Child: An Angel Message

When angel messages from nature come to you, look for unusual and out-of-the-ordinary behavior. What were you doing at the time?  What were you thinking about?  What have you been focusing on the last 24 hours?

This morning I noticed a strange object stuck on the back-screen-door as I went outside.

At first, it appeared a misguided mud dauber had built a conical clay nest on the back door.  A most unwise foundation choice for the future, with all of our daily comings and goings.

But a closer look revealed something new and different.

A small snail carrying a  sand colored conical shell on her back had climbed the screen door, and fastened herself to the metal mesh.

How did she do it?

A streak of silvery substance marked her trail along the upward way. The slippery slime had made it easy to move her foot muscle along a self-made path.

The little snail had stopped, waiting to greet me at eye-level, before I went outdoors. In the past, my mollusk experience had been limited to common round shells called Roman snails creeping along the ground.

This was something else.   The unusual behavior, and beautiful, coiled shell with its point, fit the description of an angel message.

But what did it mean? What was the point?

She was oddly out of place...in her beautiful shell, a reminder of the sea.

I stared at the fascinating little life form, wondering, How could she maintain her balance while carrying such a heavy shell? Or,  manage to stay securely fastened to the screen door?

Wanting to commune, I spoke to her, hoping to go deeper, but she had sealed herself in her hard shell with a "door" of dried slime. Later, I learned this condition is called estivation and will last until the dry spell ends.   So, she had perhaps stopped by to slow down and rest awhile.  Take it at her own pace. 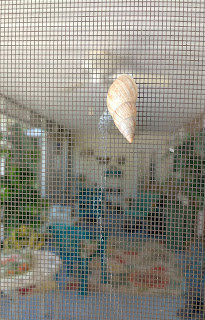 Curious to know more about the little visitor, a search revealed the spiritual symbolism.

Snails teach us to protect the inner child, the Holy Child within us.  Maybe early in life our childlike sensitivities and energies were often discouraged or ridiculed.  Thus a shell was built to protect our sensitive and tender hearts.  Snails, as messengers, remind us that the Holy Child still lives within us.  And, when a snail appears, it often serves as a reminder that it is time to bring that child out once more.

Look at the walls and shells we have built around ourselves.  Are we being too closed in?  Are we exposing our vulnerability too much?  Are we being too sensitive?  Do we need to protect ourselves a little more?  Remember that all is possible to the Holy Child within.  Are we going to keep it hidden away or bring it out to experience the miracles of life? 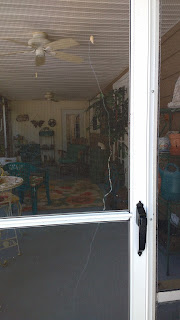 What a comforting message to remember the Holy Child resides within each of us.  All is possible with God. I'm so thankful for these loving angel touches that come with Love.

What angel nature messengers are coming to you today?  Expect the unexpected. And remember, God Loves You.