Into the Blue by Rex Hauck 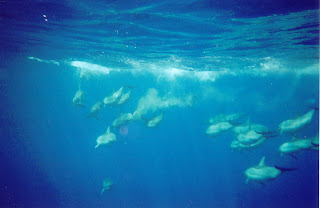 I’ve seen angels before. Mainly in captivity. On the printed pages of books and greeting cards. Or hung in galleries and museums. The ideas of artists. The promise of power but not the power itself. And then I saw one in the wild. It was three in the morning. A tap on my shoulder pulled me from sleep. I blinked, expecting to see one of my children in need of a glass of water or refuge from a bad dream. There was a figure standing over me. "Too tall." My logical brain assessed to be either of my offspring. I leaned up, on one elbow, clearing my head, blinking the sleep from my eyes.

Standing at my bedside was a woman. In the darkness, I could only discern her oval face, smiling down at me. I rose up, not physically, but my energy surging from sleep to alert. My brain scrambled to assemble understanding. Her smile brightened. She raised her hands to her waist, palms up. On her face was the peace and the beauty and the power that artists and earthlings have tried to grasp throughout human time.

She rose as her smile brightened, growing taller and more lucent even as she slowly faded altogether. Some instinct within me swung my feet over the side of the bed, onto solid ground. My brain sorted through its choices. A ‘dream’ seemed the most reasonable explanation. And offered some antiseptic comfort. The world was not crumbling. Angels were only ideas. Only dreams.

But try as my logical brain would, it could not undo the tap on my shoulder. The first contact that shook me awake. Ten years later, I never tell the story without wondering was I dreaming, and then immediately feeling her hand on my shoulder, as if it is always there.

For years, I wondered if I would ever have another encounter with a spirit so immense. And then my wife and I traveled to Hawaii for our honeymoon. We thought we deserved it and after eighteen years of marriage, our confidence was high that we had chosen our partners well.

I’d met, over the internet, a woman named Nancy Sweatt who lives in Kona on the big island, Hawaii. She’s a transplant from the mainland. One of those people who asked for divine help and when the divine answered, with what could have been interpreted as pretty improbable directions, she went ahead anyway. During her five years in Hawaii, Nancy has become a master diver and boat captain. She takes people on her thirty-foot cruiser to encounter dolphins.

I’ve seen dolphins before. Mainly in captivity. Performing in the tanks at Sea World, or on the TV news, beached on familiar sandbars and dying for reasons no one can name. Entertaining. Endangered. The memory of power, but not the power itself. And then I saw one in the wild. Actually, I saw a pod of one hundred.

They rode the bow wake. Every few seconds, one would erupt from the water, twisting like a gymnast, for a glimpse of our world, before disappearing back below. And then we donned wetsuits and entered their world. They were neither interested or intimidated by our presence. They streamed by in surges of ten and twenty. Muscling each other for position. Intertwining and streaking free. Flying grace. And sound. They chattered to each other, calling with clicks and whistles. This thousand feet of royal blue ocean might as well have been another dimension.

The dolphins I had seen until those moments had been visitors to my world. A dorsal fin rising into the sun. Now I was visiting theirs. I watched in reverence. Deep in the blue. More awake than I could remember. Grateful for a ringside seat to the actual act of living.

That night, I lay awake thinking of the things in the world that are rare. The parts of nature that humans have pushed to the edge. The endangered species. Three thousand varieties of plants and animals listed by the EPA are in danger of disappearing.

But there is an endangered species not on the EPA's list. It is my own. Humanity. I may not be in immediate danger of physical extinction, but there are too many parts of myself that I have dimmed or have been downsized. Patience, humility, imagination, compassion, joy, gratitude, faith. It is one thing to disappear with one’s habitat, and quite another thing all together to become extinct by choice.

I’ve seen faith. Mainly in captivity. Starched in a Sunday suit. Petrified on paper. And held tightly in my own hand, protected, as if it were something I could lose. As if my meager answers could not survive in the wild. I actually saw an angel, and though I did not deny her, neither did I embrace her. Given the choice between sanity and salvation, I chose sanity. And thank God, I have lived to regret it. And in a new moment, choose again. So I tell you, years ago, I saw an angel. And what’s more, I see them now. Everyday. I see them in dreams and in daylight. They speak to me in whispers and music, and in clicks and whistles. I find them virtually, everywhere I choose to look.
Posted by Rae Karen at 2:41 PM