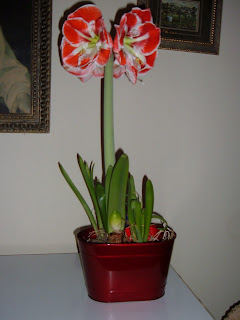 I love flowers, so it was a real treat when a spring flower garden arrived in the mail from a dear friend. The bulbs, buried underneath soil and decorative moss, would hopefully bloom before Christmas. The star of the floral show was suppose to break out of a gigantic bulb that looked like an extra large brown onion taking up most of the pot. It was hard to imagine anything so beautiful would come from it.

I watered and watched the garden for signs of wonders. Soon little green heads gently poked up from the soil, growing taller. Before long, purple hyacinths, red tulips, white tulips and crocus were in full bloom, adding much joy to the holidays.

However, the star of the show remained dormant. A big dud with not as much as a hint of green coming out of its tuber. "Looks like the one with the biggest bulb is going to be a no show." I thought. With so much potential, why wasn't anything happening? There was little I could do to force it. My critical self was getting impatient, just like with other projects that had yet to bloom. I recognized these negative thoughts were out picturing what I didn't want. I remembered how each each flower has an overlighting deva or angel, so I called to the Angel of the Amaryllis for help. Also remembering in the book, The Man Who Talks With Flowers, that these flowers long to share their secrets but we must come from love. So I began showering positive, loving thoughts on this late bloomer.

A few weeks later, a tiny speck of green appeared on the edges of the center of the amaryllis bulb. So thin, I thought I was imagining things. Before long a green stem took definite form, and over the next few days, it began climbing higher, growing straight and tall like an arrow on purpose. The four buds remained shut tight. I thought it was due to the cold. One needs warmth in order to bloom. So I moved the pot to a warmer spot. Then it happened. A beautiful blossom opened up like an umbrella. Then another. And another. And another. Each one a perfect replica of the other. One for each of the four directions, north, south, east and west.

I thanked this "beauty" for the lesson in patience and not to judge by appearances. Everything grows on time. Not our time, but God's with a little tender loving care. Today while taking this photo, I saw another amaryllis growing out of that big ugly bulb. A double blessing. So love will be blooming again. Love can always find a way.