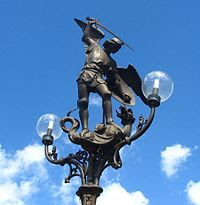 Today is in honor of Archangel Michael, called Michaelmas Day. Archangel Michael (whose name translates to "Who is Like God") is called Saint Michael in the Christian churches. He is the warrior whose light triumphs over the darkness of negativity. He is often depicted with a sword, slaying a dragon. He is the Archangel we invoke in battle against negative energies. He helps us to find the light within ourselves.

He is the patron saint of policemen, soldiers, and small children and also watches over pilgrims and strangers. He is the fiery warrior, Prince of the Heavenly Armies, who fights for right and justice and gives guidance to all who find themselves in dire straits. 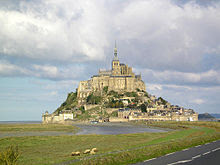 The Mont-Saint Michel in Normandy, France

There is a legend that in the late 5th century the Archangel Michael appeared to fishermen on St. Michael's Mount.

Michael is considered the greatest of all angels in the Jewish, Christian, and Islamic religions. He is known as the Holder of the Keys of Heaven and Chief of the Archangels, Angelic Prince of Israel, and Angel of the Burning Bush.

We can pray to Archangel Michael to help us whenever we find ourselves, fearful, overwhelmed and alone.

Thank you, Archangel Michael for all that you do.