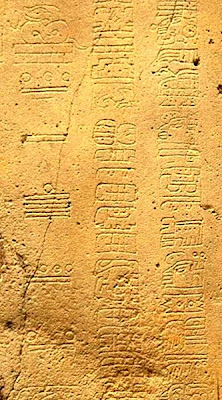 (photo from Wikipedia: small section of the glyphs)

Last year I came across a little pamphlet on guardian angels. One suggestion really appealed to me. Daily welcome the guardian angels of everyone in your city as well as the Guardian Angel overseeing the city. This request can open doors in which the angels can offer assistance as needed. Because we have free will, they do not interfere unless asked.

Since that time, every day I have welcomed the guardian angels of Deland. Yesterday evening a single engine plane crashed into the meat department at the Publix grocery store less than a mile away. The amazing thing is no one was killed; several were seriously injured, but the pilot and co-pilot survived.

I'm not saying that my prayers alone made a difference, but I believe collectively, we each can be a transformer for the love and light of God, by pausing during the day and giving thanks to our celestial friends.

Tonight we heard a lecture at Stetson University on the Mayans and especially the significance of December 21, 2012, as the end of a cycle of time known as the 13 B'aktun. The name for the new beginning is La Neuva Era, (The New Dawn). The lecturer, Gespar Pedro Gonzalez, is the only Mayan author out of more than 500 books written about this auspicious time, the ending of the 13th cycle of 144,00 days in the Mayan Long Count Calendar. His book, 13 B'aktun Mayan Visions of 2012 and Beyond, brings good news--that in spite of all the turmoil in the world-- it isn't too late for humanity to change.

Although no one knows for sure what this really means, I believe that we will be moving up in consciousness from a 3rd to a 4th and 5th dimensional frequency of living. With all the solar eruptions effecting our electromagnetic field, there is a consciousness quickening occurring globally, as well as internally. Part of this transformation, is staying in the now, and not reacting to what our physical senses are telling us, but going within.

This is an exciting time to be alive and to witness a quantum leap in consciousness.