The Powerful Protection of Psalm 91

For he shall give his angels charge over thee, to guide and protect thee in all thy ways.
Psalm 91:11

Over the years this powerful Psalm has been a great source of comfort and peace to me.  It is an insurance plan of protection if you abide in the Secret Place of the Most High (state of  divine consciousness.)

For years my husband, Elliot, and I would read Psalm 91 out loud from the Bible at the close of the Sabbath.  Mom had participated during our frequent visits and asked me if I had memorized it yet.

Her question made me realize precious time wasted that could be put to good use.  I had read many testimonies of the savings grace of Psalm 91. So I copied the verses on an index card and carried it in my purse. Whenever I had a free moment in the day, waiting in line at the post office or sitting in the car at the bank, I would study those powerful words.

It didn't come easy, but over the months, as I began to slowly build verse upon verse, committing it to memory, reciting it over and over again, something amazing began to happen as I closed my eyes and repeated the words out loud.  I could actually feel an inner presence begin to stir within my soul.  The verses had a life force, a holy presence that was permeating my being.  I had heard people say there is power in The Word, now I understood what that meant.

Shortly after memorizing the entire Psalm, my faith was put to the test.  To my amazement, there was a peace, an acceptance rather than an adverse reaction to a big challenge like in the past. The change was so palpable that my ego wondered, what was wrong with me?!  Then, I realized, over the months,  the power of Psalm 91 had been released within me. Rather than running on fear, I was now abiding in the Secret Place of the Most High, angels were watching over me. To my delight, soon the problem faded away as quickly as it had come.

Another resource had helped me, too.  A complimentary five-week email course on the web, Release the Power of Psalm 91.Study Link  Each week I had a lesson in the mail to study. The third week, was a biggie.  We were asked to step out in faith and partner with God.  To do something we felt God was asking us to do, but we were too afraid. For years, I had felt a nudge to do angel lectures, but a dreadful fear of public speaking held me back.

With the power of Psalm 91, I realized I would not be alone.  So I took a step to become a volunteer lecturer at the Association for Research & Enlightenment down the street. Encouragement came in a surprising way a week before my maiden lecture.  A little angel statue with the words ANGELS BELIEVE IN YOU crossed my path at a shop.  There was a light touch of humor as that phrase was completely new to me.  I BELIEVE IN ANGELS I knew.  It was rubber stamped on all my outgoing mail. But  the thought angels actually believe in me was radical!  In that instant, I knew the angels were cheering me on, that I could do it!

And I did.  I bought that little statue and put it on the podium, facing me as I began my journey spreading the good word about angels in our presence.  Another angel touch came when my husband found a little white feather on the floor as he was arranging the chairs in the auditorium.

So, my friends, if you have a calling, don't let fear limit you, release the Power of Psalm 91 and watch what happens with the Angels by your side. 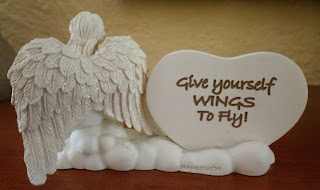 Email ThisBlogThis!Share to TwitterShare to FacebookShare to Pinterest
Labels: Psalm 91