Angels on the Road 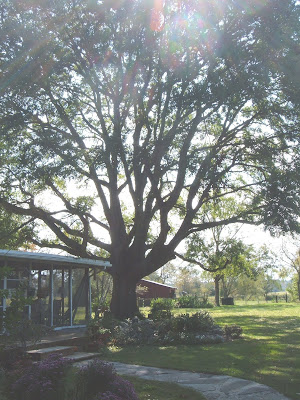 Ever felt an angel’s breath in the gentle breeze?
A teardrop in the falling rain?
Hear a whisper amongst the rustle of leaves?
Or been kissed by a lone snowflake?
Nature is an angel’s favorite hiding place.
--Carrie Latet

I love this tender quote about angels. Nature is so healing, that's where I feel closest to God. While living on the farm in Virginia, one morning a young woman lost control of her brand new car.  She ended up in the ditch by the long driveway to our cottage.

Thank goodness, she wasn't hurt and there was minimal damage to her car.

I asked her, what happened?

She wasn't sure. She had stopped at a nearby park to rest, feeling tired. When she started out on the road again, the next thing she knew she was in the ditch. As an Emergency Medical Technician (EMT), she was used to rescuing other people, but this was a first for her. And, on such a familiar road, one she had traveled most of her life.

After the police left, I invited her to sit on the swing bench under the old oak tree and get centered before driving again.

"It was as though His hand guided me safely into that ditch," she said.

I agreed, it was a heavenly landing. Her angels were watching over her.

Turns out, she had plans to drive out of state that afternoon. A thought came to me that maybe this little mishap was the worse of it. The angels wanted her to postpone her long drive until a more auspicious time.

"I hadn't thought of it that way," she smiled, feeling better. Just then, a leaf fell from the old oak tree and landed on her lap. She laughed and took it with her as a reminder of God's care.

Sometimes we get sidetracked on purpose. Our angels are keeping us on course, although it may not appear so to the ego, but it is in divine order.