Watching on the Upper Ledge: An Angel Message


Last night, while writing postcards at the old desk in the living room, I felt something on the nape of my neck.  Thinking my pendant had shifted, I reached up to adjust the chain, but it was in its proper place. Then something moved down my back. I jumped up, shaking my shirt.  A lifeless little beetle landed on the blue velvet seat cushion.  That was a first!   After his body was escorted out in the dark, I returned to the desk, a little shaken.

That's when I spotted him.  A plump beige treefrog. There he was, patiently waiting on the ledge outside the sealed upper window right by my desk.  Huddled in the far corner by the light of the desk lamp, I could see how he was in a perfect place to catch bugs attracted to the light.

I grabbed my phone for a photo and saw his little gills billow in and out as I zoomed in. The flash reflected on the windowpane. Not the best picture, but I didn't want to intrude with retakes. I just needed a little proof that he had actually climbed the outer stucco wall by the lantana bush to pose where I wouldn't miss him. 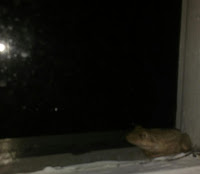 In that moment, it's hard to describe the buried feelings that washed over me.  Almost bringing tears, as I remembered frog is an acronym to Fully Rely On God.  There he was --watching over me at the window to my little world. Frogs have to do with water, emotions.  I was surprised by the depth of my reaction, feeling rather silly and foolish, with childlike tears, all from a little frog messenger.

His visit was so deliberate, that further study on the frog was warranted.  He stayed for quite awhile, but after I finished reading aloud the message frog brings,  I glanced toward the window in gratitude. He was gone, having taken a leap off the upper ledge. Mission accomplished.  On to the next delivery...

So if you're reading this angel message from nature, the frog brings good news to expect new beginnings, fertility and new waters to flow in your life. Fully rely on God.