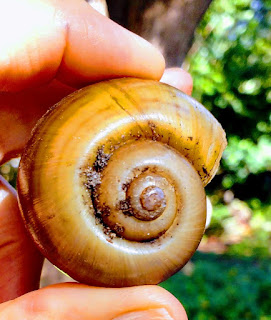 I've learned that you don't have to look hard for angel messages.  If we're supposed to see or find something helpful, it will naturally happen, as long as we keep an open mind, and a feeling of expectancy, having invited our loving angels to be with us.

Last Sunday, I spotted something brown in the grass as Elliot and I were returning to the car, after enjoying a picnic lunch by the windy waters at Lake Helen.

At first, I thought it was only a plain brown leaf, but it had an unusual shine.  So I reached down to take a closer look.

WOW.  What a find!   A giant empty snail shell had been buried in the grassy dirt.

It was the biggest one I'd ever seen.  Holding the brown shiny spiral in my hand,  it was unlike the small white shells nestled in the sandy soil in our front yard. This big golden amber shell clearly stood out, of a different nature.  So much so, I wondered about the message.

Am I moving too slow in a really BIG way!?

Later, I learned something from this little excavation.

A snail is born with a little piece of hard substance, it's that little circular spot in the center of its shell.  As the snail grows, the shell naturally adapts to the proper size, by wrapping a soft substance that hardens into a another layer of shell for protection.

The spiral pattern is a universal symbol.  Life goes round and round, in a repeating spiral, but hopefully we are expanding our consciousness and growing more and more in spirit in each go-round.  The lessons may appear to be the same old same old, as we wind around and around, but we are changing, we are not the same, we are getting stronger and better with each successive rotation. We are coming up higher.

Since Snail carries its shell on its back like a mobile trailer, wherever it goes, it finds itself at home.  Thankful to the angels, I brought this prized snail shell home.  It rests in a decorative planter in the meditation garden to remind me to enjoy the journey.

What angel signs are coming into focus in your life?

Whatever they are, take it at your own pace.  Snail reminds us that it's not how fast or slow we move, eventually we all arrive at our destination.  Home.