It's funny how such a tiny thing can make such a big impression.  On Friday, Elliot and I had stopped by our favorite local orange grove, Marshall's, for a bag of  sweet tasting navel oranges.  This tradition almost stopped several years ago when the state of Florida was in jeopardy of losing its orange trees.  Imported bees were part of a rescue mission at Marshall's Grove, as the owner did not want to spray  pesticides to protect the orange trees.  We called for the angels to help and prayers were in the works, too.

This year the orange grove is yielding a really good crop, thanks to the bees, and the angels.

Driving along the dirt lane, through the orange-laden trees, our spirits were soaring at the wonderful turn-around for the grove.  We had juicy organic oranges again.

Our next stop was Office Max to buy a memory stick for my computer.

Sitting at a traffic light, my attention was drawn to my side-view mirror.
Something had moved on it.

My first thought was a tiny lizard was taking a joy ride. But the light changed, and in the flow of traffic, I could now see it was a hitchhiker from the orange grove.   A small fuzzy striped bumblebee.

I looked out, cheering him, Hold on!  We don't have far to go.

Undaunted by the wind on the International Speedway, he stuck to the white mirror's rim while Elliot did his best to drive slow.

Office Max was over the bridge, less than a mile away.

I watched that little creature  with a strange feeling that we were one on this wild unexpected ride.  I asked the angels to surround that little orange grove worker bee and keep him safe.

We were almost there.

Elliot pulled the car into the lot, navigating the dips, so as not to bounce off the bee rider as we arrived at our destination.

I gazed out the window in amazement.  That fuzzy little bee, although somewhat dazed had made it, against all odds.  As I took his photo, the manufacturer's message on the mirror caught my attention:

OBJECTS IN MIRROR ARE CLOSER THAN THEY APPEAR.

I've come to see how the outer world is a mirror of what takes place in our inner world.  I was thankful for that inner impulse, that I call an angel nudge, that pointed out the little bee on the passenger mirror.

Bees are a long time symbol of doing the impossible because their body is too large for  its small wings, but that doesn't stop the bee from defying science.  The fast speed of those little wings is what makes flight possible.

I wondered about returning the bee traveler back to the orange grove, but Elliot said, the angels would guide him to his next assignment.  They could even lead him back home.  I smiled, not sure this was the case, but it was a nice thought.  We let him be, and went into Office Max.

While shopping in the store, I looked about for a little box to transport the honeybee home to our garden.

But it seems I need not have worried...

For when we returned to our car, a short time later, our fuzzy bee messenger had flown away.

But more bee energy was in the works.

That evening Elliot pointed out a decorative dish on the nightstand, a gift many years ago.  See the bee on it?

The best is yet to come! 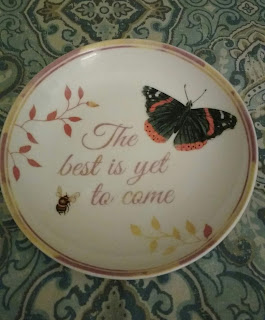 So if you're reading this angel blog, take the message of the bee to heart.

Let yourself be carried away by the wonder of  each moment and taste the sweet things in life that come with an elixir of  joy.

Enjoy your day with the Angels, and take notice of those angelic impulses that reflect your inner landscape.