Against all Odds: An Angel Message

On the Spring Solstice, the view at the lake had shifted.  The devoted sandhill parent was off the nest. A daily sight I'd become fondly accustomed to the last month.  The vacant nest was a sign of good news.  A local birdwatcher had recently predicted the imminent birth to be within three days.  He also explained that the parents' take turns on the nest.  The female has night duty and the male sits on the nest during the day.  The couple shares in the incubation.   I was happy to hear that.

When the weekend weather brought windy rain and colder temperatures, the nesting cranes came to mind at night, and I asked the angels of nature to watch over them.

On Sunday, to celebrate the Spring Solstice, Elliot and I stopped by the lake.  He spotted the cranes far off at a new grassy area. Wanting to respect their privacy, I zoomed in with the camera hoping to get a glimpse of their offspring.  The lens kept jumping, but I thought I saw a fuzzy brown ball in the grass by them.  It seemed like wishful thinking as I snapped the picture, not expecting anything but a blur of grasses, with no cranes at all.  I soon forgot about it.

Today at the lake, the cranes were back by the nest, but the sunlight was so bright only my reflection appeared in the LCD screen.  I gave up, and took pics instead of a wading bluish bird fishing in the shallows.

Back at home, when the photos were uploaded, I could hardly believe it.  The one and only photo taken on the Spring Solstice of the sandhills had captured the cute little chick (colt).  A mini miracle, at a day or so old. 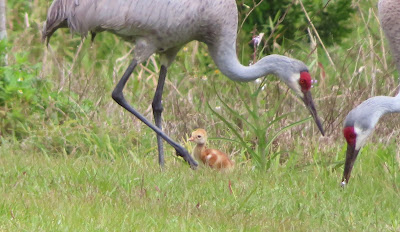 And, what had appeared hopeless at that time, turned out to be a family portrait, featuring the newborn and both parents. A little quirky, but they were all there in the picture.

Smiling, I recalled having asked the angels for help as I sat in the car, zooming in. I so wanted to see if they had their baby.

A good lesson for me to remember with other things that appear too difficult to maneuver, to ask the angels for help.