The Wood Stork on High: An Angel Message

Nature came calling this morning, a welcoming spectacle in a gray sky!

His visit seemed deliberate as the Wood Stork posed on one leg, high on the dead tree across the lane.   Stork is about new birth, new beginnings.  An excitement of something new and different stirred the air... we're all ready for a new beginning. 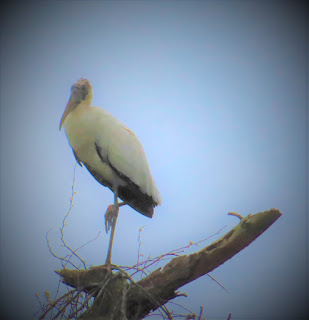 These wader birds are far from lookers.   A reminder not to judge by appearances. It's what's on the inside that counts. God reads our hearts. The Wood Stork's bald head and feathery body seem mismatched. Fluffy white feathers up to his neck, suddenly frame an old man's face. Although I've only seen Wood Storks a few times,  I like these rare old birds.  They have character, and exude wisdom and patience, as if they know the ending of the story and can afford to be patient.

Not only are storks symbolic of new birth, but I just learned they also represent our Higher Power.  With no song or cry to call their own, they use bill clapping, body gestures, and dance to communicate.

Our wader bird is oddly out of place, far from the lake, keeping watch on high.  When a bird makes a spectacle like this, nature is sending a message your way so pay attention.

Wood storks like to fish in an unusual way.  They open their bills underwater, patiently waiting for a fish to swim by.  Then like a mousetrap their bills snap shut and they eat the fish.  They eat small fish, but many of them.  A sign to pay attention to little opportunities that come your way for sustenance. 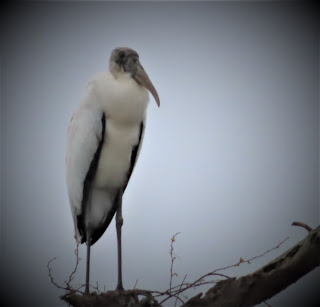 Our vigilant visitor stood still for over an hour, and then disappeared in the pouring rain...

But he left a lasting impression.  Rely on your Higher Power, and do not be deceived by appearances. 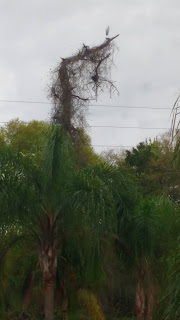