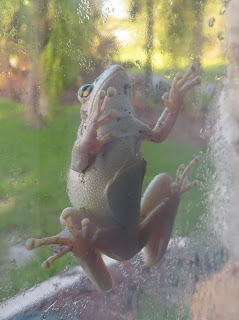 We all can use a perk at times, a little something unexpected that brings joy to our hearts.  A reminder that we aren't traveling this big universe alone.  An underlying spiritual realm abounds, rarely seen but deeply felt in moments of ineffable joy like a tender tap from an angel on our shoulder.  A nudge to believe in love over fear, the unseen more than the seen, and to have more faith in the spiritual than the material.  Communications may come in a myriad of ways depending on the desires of the receiver. But they always speak of God's everlasting love for His children in a language they can understand.

Early this morning, a joyful messenger of faith appeared out-of-the-blue.

A giant treefrog was clinging to the sunroom window!

Far from his home in the trees where he should be sleeping during the day, he had become adventurous and climbed up the windowpane awashed in glistening morning dew.  Those little well-formed disks on  his fingers and toes were like suction cups on the glass to support his weight as he peeked into the house between the vertical blinds.

A frog always brings a smile as a messenger to Fully Rely On God (the acronym for F.R.O.G.)   A year ago, the last frog visitor, had been a tiny treefrog no bigger than a dime. Judging by the enormous size of this granddaddy, the message is a BIG call for even more FAITH now. The kind of faith that can move mountains.

Wanting a photo, I crept to the window with my camera, and slowly separated the blinds. Patient and poised, he clung motionless while his throat undulated with each breath.   When I looked at his eyes up close on top of his head, they were amazing. They looked like tiny planets full of speckles of gold and depth.  I thanked him for stopping by just when we needed the reminder to fully rely on God.

The treefrog's visit was so deliberate, I read up on the symbolism. It was more appropriate than I'd thought.

Treefrog often indicates, you now have the ability to grasp and move to new environments.  Places that others could not maneuver so well you will be able to handle. So don't let the difficulty of movement dissuade you from pursuing what you have set your eyes upon. You will find the climb easier than you expected.

Treefrogs are also indicators of a change in weather.  A group of treefrogs croaking is a sign raining is coming. When a treefrog appears, look for a change coming to some aspect of your life.

It is comforting to know that as we climb higher and cling to the Truth of God's Love, there is nothing to fear when fully relying on Him. Regardless of weather or environment, we are always in God's tender care with the help of His angels to support and guide us safely home. 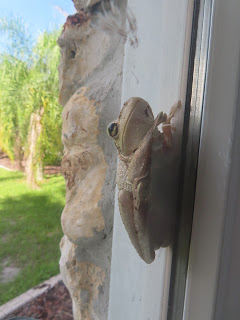