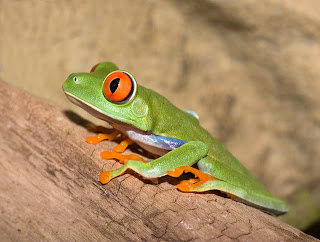 After dinner last night, I took the trash outside. I opened the large blue recycling container and tossed the bag in. Something green caught my eye. A cute little tree frog was clinging to the inside wall two-thirds of the way up the can. He was almost free, but the lid had been shut.
I was so happy I took the trash out. I could help set him free. I grabbed a short stick and tried to coach him. "Let go and climb aboard," but he was too afraid.
And then he did it.
He took an action that made things worse. He jumped down inside the can and disappeared underneath the bags.
Now what? I couldn't just close the lid and leave him there. And if I left the lid off, some other critters may come and have a picnic in the trash. I had to do something. With the container being so deep, my arm couldn't reach far enough to move the bags. As luck would have it, nearby I found a a perfect stick, long enough with a twig to hook the bags.
Not wanting to crush the little guy, I called on the angels for help. Then I began lifting the first bag with my stick. To my surprise, he was clinging to that bag! It was almost too easy to be true. In answer to my prayer, he rode it to the top, just like an elevator. Gently I set the bag on the ground. His little fingers were like suction cups because, again, he wouldn't let go. With a little prodding, the reluctant rescuee was freed by the old walnut tree.

Sometimes we may feel like our life has been trashed. We find ourselves stuck in a mess with no likely means of escape. The frog is a good messenger. As I have written before, F.R.O.G. is the acronym for Fully Rely On God. We are never alone. God has sent his angels to guide and protect us in all of our ways.
Angelic blessings,
Karen
Posted by Rae Karen at 7:30 PM

Email ThisBlogThis!Share to TwitterShare to FacebookShare to Pinterest
Labels: nature